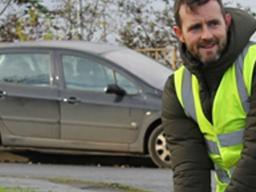 A small army of Glasgow volunteers are preparing to brave the cold to help their communities this winter.

When temperatures plunge, the city's Winter Wardens will get wrapped up warm, grab their shovels and head outside to salt paths in their neighbourhoods.

These city residents are doing their bit for their neighbourhoods and their efforts run in tandem with Glasgow City Council's work to keep the city moving when bad weather strikes.

Youth worker Peter Divers gives up his own time to ensure people can access Drumchapel Community Centre safely and he has also encouraged other local people to do the same around their homes and premises.

During the summer, Peter is a Community Safety Glasgow Neighbourhood Improvement Volunteer carrying out litter picks and co-ordinating community clean ups in Drumchapel. In the winter, he volunteers as a Winter Warden, spreading rock salt provided by the council to melt ice and snow.

Thirty-five-year-old Peter said: "A lot of different age groups use the centre and its important they can get in and out easily.

"We get a big industrial bag of rock salt delivered to the centre by the council and I shovel it on to the car park and paths when it's cold. I like to make the place a bit safer for people in bad weather.

"Last year it was pretty mild but the year before there was a lot of snow, so there was a bit more work. I also let people know we have grit here, if they want to come and get some for their own paths etc."

Peter has also encouraged COPE Scotland and St Mark's Church to get involved and grit the areas around their own buildings in Drumchapel.

Other Winter Wardens grit in their own streets and help elderly or infirm neighbours spread salt on their paths.

Councillor Kenny McLean, Glasgow City Council's Neighbourhoods and Housing Convener, said: "Volunteer Winter Wardens do a great job in their communities. They pitch in because they care about their neighbours and neighbourhoods. Communities pull together when the going gets tough and extreme winter weather can be challenging. The volunteers' work is a great example of how true Glaswegian community spirit can make a huge difference to daily life. I applaud them all for being so proactive !"

Around 1400 council salt bins are available in neighbourhoods across the city - residents are encouraged to use these to grit their drives, paths and streets if snow or freezing temperatures are forecast.

Small amounts of free rock salt (up to 10kg) are also available to the public at council and park depots. Please take your own bags to Victoria Park, Kings Park, Springburn Park or Greenfield Park for collection. Depots at Dawsholm, Shieldhall and Easter Queenslie recycling centres also supply free salt. They are open Monday to Sunday from 10am to 4pm.

The council closely monitors weather forecasts and grits city streets when freezing weather is predicted - top priority is given to major bus routes, junctions and routes around hospitals and fire stations.

If you'd like to become a Neighbourhood Improvement Volunteer email commsafetynies@glasgow.gov.uk for more information.

Details of the council's Winter Maintenance Plan can be found at https://www.glasgow.gov.uk/index.aspx?articleid=17051