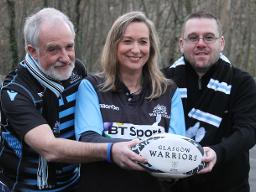 Rugby fans are being urged to help tackle Violence Against Women.

Supporters attending the Glasgow Warriors versus Montpellier Herault match at Scotstoun on December 8th will be invited to sign the White Ribbon Scotland pledge as part of the city's 16 Days of Action.

The XVIth Warrior fan club has teamed up with Glasgow's Violence Against Women Partnership (GVAWP) to encourage the crowd to pledge never to commit, condone or remain silent about all forms of violence against women.

16 Days is a global campaign highlighting gender based violence and the work being done around the world to tackle it. This year the theme is Leave No One Behind and people are encouraged to wear white ribbons to show their support.

GVAWP has a zero tolerance approach to the issue and works closely with agencies to prevent violence against women and challenge attitudes which perpetuate it. It also aims to empower women and encourage them to report incidents.

Robert Stewart, Chair of The XVIth Warrior Supporters Group, said: "The vast majority of men are appalled at violence against women and this is a chance for them to do their bit to challenge it. A lot of families attend the rugby and by signing the pledge and wearing a White Ribbon, men will be acting  as good role models to their sons and empowering their daughters. They'll also be highlighting the issue and sending out a clear message to offenders that inappropriate attitudes and behaviour will not be accepted."

The Daisy Project and Glasgow Women's Library have also got together to create a theatre production highlighting the journeys of women who have overcome abuse, entitled "Her Spirit Soared". Four mini shows will tell stories of female strength and resilience to beat gender inequality, forced marriage, family abuse and controlling partners. The performances will take place at the Tramway in Albert Drive from 6pm on Saturday, November 30th.

PEEK (Possibilities for Each and Every Child) has also been working with four groups of young women on a 10 week programme funded by the People's Postcode Trust. The Breakthrough project explores issues such as body image, violence against women, gender stereotyping and the sexualisation of women in the media. Participants have produced an artistic show which will be unveiled at Calton Heritage and Learning Centre at 7.30pm on the same date as the Tramway performance.

Councillor Jim Coleman, Chair of Glasgow's Violence Against Women Partnership, said: "This guidance was developed in recognition of the relationship youth workers have with children and young people. We have a responsibility to build their skills and knowledge, to ensure they know how to handle complaints of gender based violence correctly in a youth work setting.

"The guidance is about giving safe adults the tools to help young people with critical thinking around the gamut of violence against women. The guidance and associated training will give youth workers the ability to develop essential skills to address intolerable behaviour and empower girls."

The Routes Out (of Prostitution) service run by Community Safety Glasgow will also hold a half day awareness raising event entitled, Not Yet Equally Safe - Responding to Sexual Exploitation in Glasgow, at the Scottish Youth Theatre on December 6. This event was fully booked within 24 hours of being announced.

GVAWP will also discuss on-campus safety for female students at an event run in conjunction with the Scottish Government's Equally Safe in Higher Education programme on December 7. The workshop is aimed at higher education professionals and will take place in the University of Strathclyde's Technology Innovation Centre.

Find out more about Sign the White Ribbon pledge athttp://www.whiteribbonscotland.org.uk/