No break in electric bus service for Riverside Museum 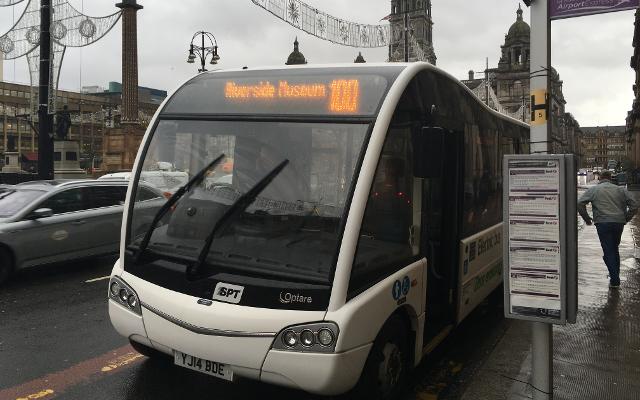 The Riverside 100 electric bus service is set to continue without interruption after the council secured three months of funding from energy firm SP Energy Networks.

The £25,000 grant from Scottish Power's distribution division will allow the Riverside 100 to keep operating until mid-February when the contract to run the service will again go out to tender.

Running between the Riverside Museum, Kelvingrove Art Gallery and Museum, SECC and the city centre, the service was due to stop mid-November following contractual and financial difficulties.

However, the service won a last minute reprieve when the council reached an agreement with SP Energy Networks to tap into the electricity network operator's £20m Green Economy Fund, which is supporting low carbon transport and heating projects around Scotland.

Councillor Anna Richardson, City Convener for Sustainability and Carbon Reduction, expressed her delight that Glasgow's first ever electric bus service will be maintained continuously ahead of a redesign of the operation next year.

Councillor Richardson said: "It's tremendous news that the Riverside 100 will continue to operate without any break in the service. Since the difficulties with the service emerged, we have been working exceptionally hard to find another way forward.

"The Riverside 100 provides a direct public transport link from the city centre to Glasgow's two most popular museums, using zero emissions electric vehicles.  As a council we are fully behind efforts to make our public transport as clean and as efficient as possible.

"So I am absolutely delighted that we've managed to secure the support of SP Energy Network to keep the Riverside 100 running while we continue to work on ensuring the service's long term future. There will now be no interruption to the service before we go out to tender for a new operator in early part of next year."

Frank Mitchell, Chief Executive of SP Energy Networks, said:"There are many projects, large and small, which are carrying out innovative and inspiring work to expand Scotland's green economy and accelerate local economic growth. The Green Economy Fund can provide them with the financial boost required to make great ideas a reality."