Glasgow City Council was today (4 June) given an update on £25million proposals to use Glasgow City Region City Deal funding to transform Custom House Quay, which sits on the north bank of the Clyde in the city centre between Victoria Bridge and Glasgow Bridge. 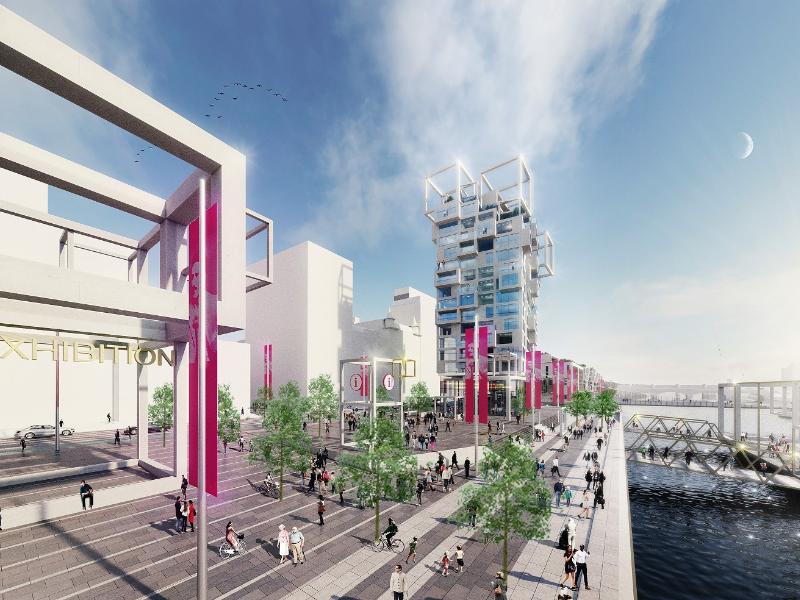 Custom House Quay is the City Centre's main frontage to the River Clyde but it does not currently make the contribution it should towards the council's aspiration for a multifunctional and vibrant waterfront. Concerns about the structural integrity of the quay wall mean that use of this section of the waterfront for large scale events is discouraged and a lack of attractions means that the area does not benefit from footfall, particularly in the evening.

It is proposed that City Deal funding of approximately £25million is used to fund the construction of a re-aligned quay wall and provision of development platforms within a high quality public realm setting, enhancing pedestrian and cycle connectivity along the waterfront.

Initial feasibility work has demonstrated that the construction of a new quay wall 20 metres into the river enables the site to accommodate a mixed-use development which retains public access along the river edge and delivers significant public spaces at the axis with Dixon Street and in front of St Andrew's RC Cathedral.

A mix of residential, hotel and commercial uses with active ground floor uses such as bars and restaurants will generate footfall and offer the level of passive surveillance necessary to ensure the area achieves its full potential as an attractive waterfront destination for Glasgow's citizens and visitors to the area.

Soft market-testing indicated significant developer interest on Custom House Quay as a development opportunity. The redevelopment of this site would be expected to act as a catalyst for other regeneration projects on the Clyde.

The council recently consulted on the Strategic Development Framework for the River Clyde, which aims to reposition the river corridor as a vibrant and multi-functional part of Glasgow. These plans are being supported through just over £50million of Glasgow City Region City Deal funding that has been allocated for investment in quay walls on the Clyde between the city centre and the Riverside Museum.

This particular City Deal funding has four specific aims: addressing the structural integrity of quay walls; enhancing pedestrian and cycle connectivity along the waterfront; unlocking the development potential of vacant and derelict land close to the waterfront; and bringing greater vibrancy to the river and its banks.

Councillor Susan Aitken, Leader of Glasgow City Council and Chair of the Glasgow City Region Cabinet, said: "Custom House Quay is very important both in terms of its location on the riverside in the city centre, close to Buchanan Street and St Enoch Square, and as an attractive development opportunity. Glasgow City Region City Deal funding means that its redevelopment can now take place. Investment in strategic sites on the Clyde is currently taking place at Glasgow Harbour and at Tradeston with the Barclays campus, and the development of Custom House Quay would be another step towards realising the full potential of the waterfront."

A previous residential-led plan to develop this site did not happen due to changing market conditions, and the cost of a new quay wall meant the project was not commercially viable.

Next steps for this planned transformation will be the development of design for the proposal and the submission of an application - supported by a masterplan - for planning permission in principle. Construction is expected to begin in Spring 2022 with completion in Spring 2024.

The £1.13billion Glasgow City Region City Deal is an agreement between the UK Government, Scottish Government and eight local authorities across Glasgow and the Clyde Valley. It will fund major infrastructure projects, create thousands of new jobs and assist thousands of unemployed people back to work, as well as improving public transport and connectivity, driving business innovation and growth and generating billions of pounds of private sector investment.

More information about the Glasgow City Region City Deal is available at www.glasgowcityregion.co.uk.