A new project will see 11 vacant shop units on Glasgow's historic High Street and Saltmarket transformed into interim / temporary spaces, most of which are for the creative industries, was launched today. 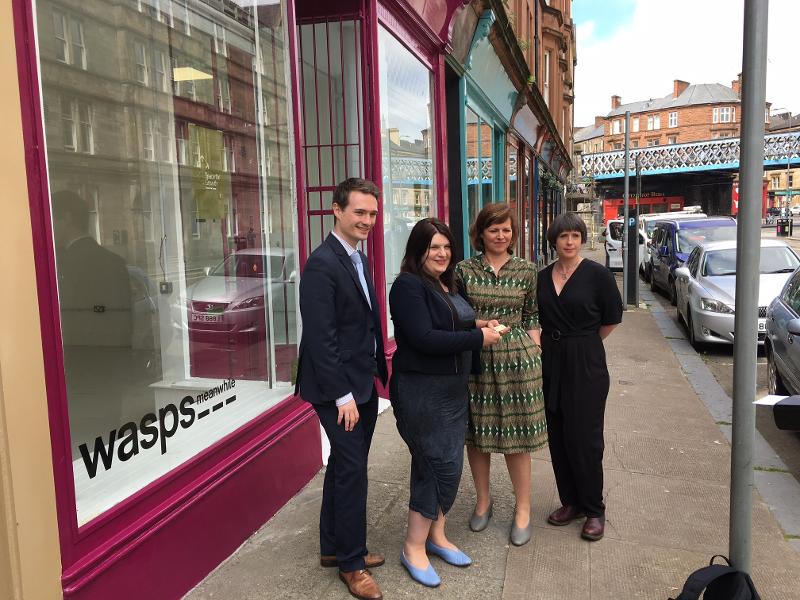 This Meanwhile Space project aims to both increase the vitality of areas by increasing footfall and support new and growing businesses.  The first of these - the New Glasgow Society, an art gallery, moved in on 21 May, with all of the other units to be occupied shortly.

The initiative, one of 26 exciting projects being delivered as part of the Glasgow City Council's High Street Area Strategy (HSAS), is being delivered by City Property Glasgow (Investments) and funded by City Property Glasgow (Investments) and Glasgow City Council, is also part of the council's wider Space for Growth strategy, will see a number of long term vacant shop units transformed into temporary creative spaces.

Based in the Saltmarket, St Andrews Street and High Street areas of the city, the shop units have undergone extensive renovation work over the last six months to transform these until they are ready for occupation.  Each space has a programme of exciting events lined up over the next year which include a number of exhibitions and workshops open to the public.

The initiative, which has already seen success in London and Paris, is part of the HSAS plans to revitalise the area, helping to develop creative organisations, creating jobs and supporting inclusive economic growth across Glasgow. It is also hoped that by making the units available to the creative community that the initiative will complement the vision outlined in the HSAS; supporting a thriving local community, with a visitor offer focused on the unique heritage assets of the area and the independent businesses within this historic corridor.

There will be an evaluation of the project by Glasgow Chamber of Commerce, which will consider the roll-out of similar models to other parts if Glasgow.

Councillor Susan Aitken, Leader of Glasgow City Council, said: "The High Street and Saltmarket area is the historic heart of our great city. With its rich heritage, resonance with Glaswegians and proximity to the city centre, it has so much potential - but has been neglected for far too long. Meanwhile Space is a fantastic opportunity to not simply breathe new life into the area but to help nurture one of Glasgow's key sectors, the creative industries.  The flourishing galleries and creative spaces in adjoining streets show what can be achieved. Glasgow Chamber of Commerce will evaluate this project, highlight the best practices which may emerge to wider city centre property owners and then encourage the roll out of the approach to other areas in the city."

Councillor Angus Millar, Chair of the High Street Reference Group, said: "The Meanwhile Space programme is a key part of what we are doing to revitalise the High Street and Saltmarket area, providing space for new and growing businesses to develop in this historic Glasgow quarter.  Given the great heritage of this area, it's right that many of the spaces in this project are being used by organisations from the creative industries, and I am sure they will make the High Street and Saltmarket an even more attractive place to work, live and visit."

Audrey Carlin, Chief Executive Officer of WASPS, said: "WASPS is delighted to be taking on five units as part of the Meanwhile Space project.  This initiative offers something that doesn't already exist in the city - a transition space in which we can support creative people to move from an artist studio into a more public facing shopfront, ultimately allowing them to develop a sustainable business and contribute to Glasgow's economy long term. These creative people will also benefit from being part of WASPS' studio network across Scotland, made up of 900 creative people in 19 locations, and the opportunities that this brings with it for creative career development."

Some of the other tenants include SOGO and TRACTion Cancer Support.

More detail on the High Street Area Strategy is available at: https://www.glasgowcitycentrestrategy.com/high-street-area-strategy.