A Glasgow City Council committee today (28 January) considered the findings of the recent public engagement on the future use and design of George Square, the city's civic centre and principal urban space. 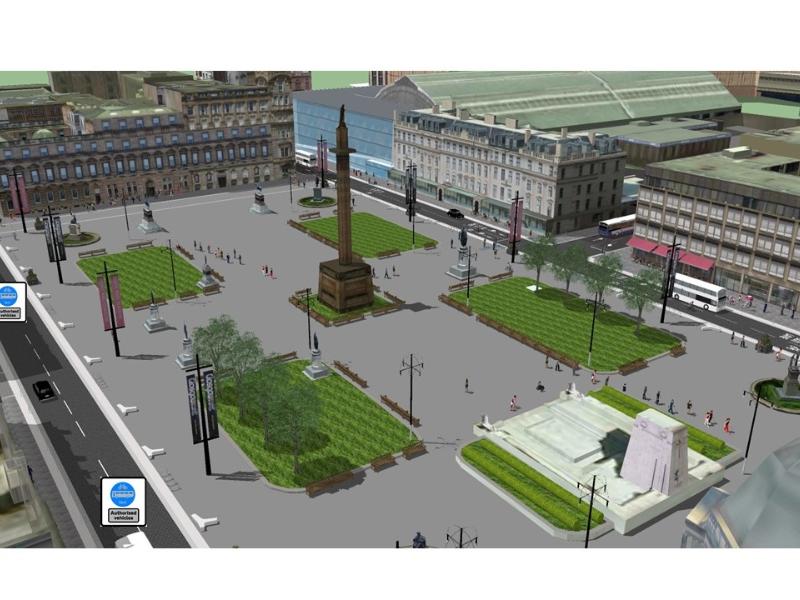 The city-wide Public Conversation about George Square - which focused on how people use the square, what they think about it, what it means to the city, and the ambitions people have for it - saw 2,267 submissions received in October/November 2019. The engagement was carried out online - the website used to host online parts of the conversation was viewed almost 8,000 times - and through surveys at city libraries, workshops, vox pops and other events.

The Conversation confirmed that the people of Glasgow feel that change is required at George Square, while respecting its history and the aspects of the square that remain valued.

The key themes of the findings from the Conversation - the brief for which was framed by the City Urbanist - include: a reduction in traffic or an element of pedestrianisation; a more sustainable / green space; a place to sit or relax; a mixed response to statues (ranging from retained, altered in layout and removed to new statues, cleaning and conservation); a water feature, fountain or pond.

These themes align with previous consultations in 2017 and 2018 on the future of the square, which also called for less traffic; more greening and sustainability; retaining a permanently accessible public space for passing through, sitting, gathering and demonstrating; a managed event strategy as part of a wider city centre event space plan; design quality and public involvement in design.

It is proposed - given the clear consensus on the need to reduce traffic - that the preferred option for traffic at George Square is the eventual full pedestrianisation of the east and west sides, with public transport and cycling corridors on the north and south side. This proposed objective would see a reconfigured traffic layout - including the removal of parking - that would be delivered preferably by the summer of 2020.

This option would involve temporary features and facilities, with permanent public realm and road infrastructure works to be progressed after summer 2023, when the square will be used for the UCI Cycling Championships. It should be noted that the final confirmation of the traffic arrangements on the square will be shaped by the emerging City Centre Transport Strategy.

In terms of the people of Glasgow's ambitions for the square, the findings of the conversation showed the desire for it to be a place for sightseeing the buildings or monuments, with grass, trees and flowers - an open space to relax, meet or socialise.

The delivery of the redeveloped George Square is proposed to be part of the wider Avenues programme in the city centre, with the design, quality and consistency of both projects are aligned, so the project scope with include the George Street and St Vincent Street Avenues as well as the square. In addition, the intention is to create a high-quality pedestrian connection and public realm on Hanover Street and Millar Street to connect the Argyle Street and St Vincent Street Avenues.

The estimated cost for the proposed George Square works is between £8million - £10million, with the proposed works at Hanover Street and Miller Street estimated at £2 - £3million. These costs will be met from existing capital budgets, including the Glasgow City Region City Deal.

The works will be procured and governed as part of the Avenue's 'Block C' (covering George Square, George Street, Hanover Street, Hope Street, IFSD West, John Street, Miller Street, St Vincent Place and St Vincent Street) design contract, which is going out to tender in April with a contract appointment expected in October this year. The wider design of Block C, and the concept design for George Square will be the responsibility of the external contractors, with detailed and technical design for George Square undertaken by Glasgow City Council.

There will also be a need for a sustainable solution to the interface between George Square and Queen Street Station, to ensure necessary accessibility and servicing requirements with appropriate public transport and active travel facilities and infrastructure. The scope of works for all the work around the square will be established as the design process progresses, with detail to be developed through a further process of intensive analysis and public engagement.

The design process for the redevelopment of the square responds to the global climate emergency in a number of ways, including the introduction of green infrastructure; tackling poor air quality; promoting and prioritising active travel and public transport; using SMART infrastructure to make this city centre neighbourhood resilient and sustainable; and mitigating against the possible impacts of climate change through surface water management.

It is proposed that the delivery of this, the George Square Area Strategy project, will be monitored by a cross-party group which will review the project as it develops.

Councillor Susan Aitken, Leader of Glasgow City Council, said: "The consultation findings echo what our citizens routinely tell us, that something clearly has to change with George Square. I'm really encouraged that there is consensus on many key elements. The public conversations we have facilitated tell us our people want a greener square with less traffic, a space of high design quality and which continues to function as it traditionally has done, as a space for Glaswegians to gather. Our task now is to respond to that, respecting the Square's history and place in Glasgow life whilst delivering a civic space which is both attractive and cherished and reflects our status as a European city."

The recommendations from the report will now go the council's City Administration Committee on 6 February where consideration will be given for approval to proceed.