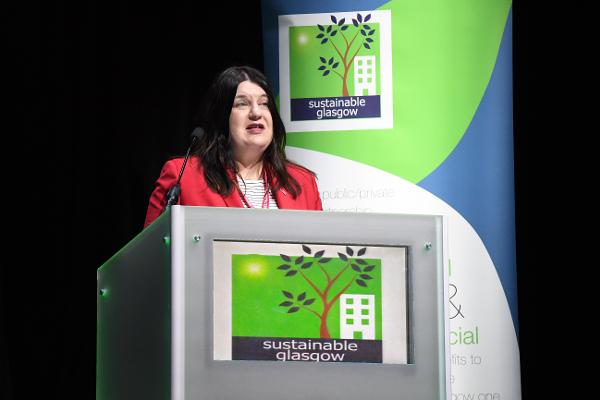 City chiefs from the public and private sectors, academia and civil society have been mobilised to lead Glasgow's race to carbon net zero by 2030.

The call for joint action across Glasgow came from Councillor Susan Aitken, Leader of Glasgow City Council, as she launched the Sustainable Glasgow partnership to tackle the city's fight against climate change.

Over 400 representatives from major businesses, universities, public sector organisations and environmental campaign groups all gathered at the Scottish Event Campus today to begin work on plotting Glasgow's path to carbon neutrality over the next ten years.

With Glasgow declaring a climate emergency in May 2019, it is intended that Sustainable Glasgow will provide a focal point for achieving the city's ambitious target for carbon reduction.

Councillor Aitken welcomed the fact that so many city leaders answered the call to action on climate change as Glasgow prepares to welcome the United Nations Climate Change Conference, COP26, in November.

With the backing of such a diverse range of companies, organisations and institutions, she believes that Sustainable Glasgow can be the basis for extensive collaboration on the effort to decarbonise the city in the years ahead.

Councillor Aitken said: "I am delighted there has been such an overwhelming, positive response to the launch of Sustainable Glasgow. Cities must lead the way to a sustainable future for our planet and Glasgow can become the city of our times, on the issue of our times.

"Cities are where the carbon is emitted, through our homes, our industries, our transportation, and this is where the change need to take place to achieve carbon neutrality. The launch of Sustainable Glasgow can be a landmark in our race to Net Zero, the start of a collaboration that delivers a sustainable future for our city and citizens.

"Glasgow can match ambition with achievement, combining a green and inclusive urban environment with a green and inclusive economy. But Government, neither local nor national, can do this alone. As our nation's largest city, Glasgow is renowned as a centre for innovation and for the new green economy. We have plenty to build upon with genuine partnership working between the local authority, business, industry and our academic sectors already one of our international selling points.

"As hosts of COP26, Glasgow has an opportunity of global significance to promote and accelerate our efforts to secure a just transition to carbon neutrality. Economic growth, improving the quality of life of all of our citizens and carbon neutrality are entirely compatible, but we all must begin planning for it now."

At the launch event, key speeches were given by Councillor Aitken, George Gillespie, Executive Director for the council's Neighbourhood and Sustainability department and Michelle McGinty, who is leading Glasgow City Council's team preparing the city for COP26.

Themes and discussion points raised at the event were also captured by live illustrator, Linda Hunter.