Concerns about Impact of Pandemic on Mental Health

CAPTION: Lockdown was an emotional roller coaster for many people. Suicide prevention trainer, Stewart Moore, has personal experience of its highs and lows and is urging people to talk about their feelings. Stewart is pictured with his wife, Marion, and their first grandchild, Lucca. 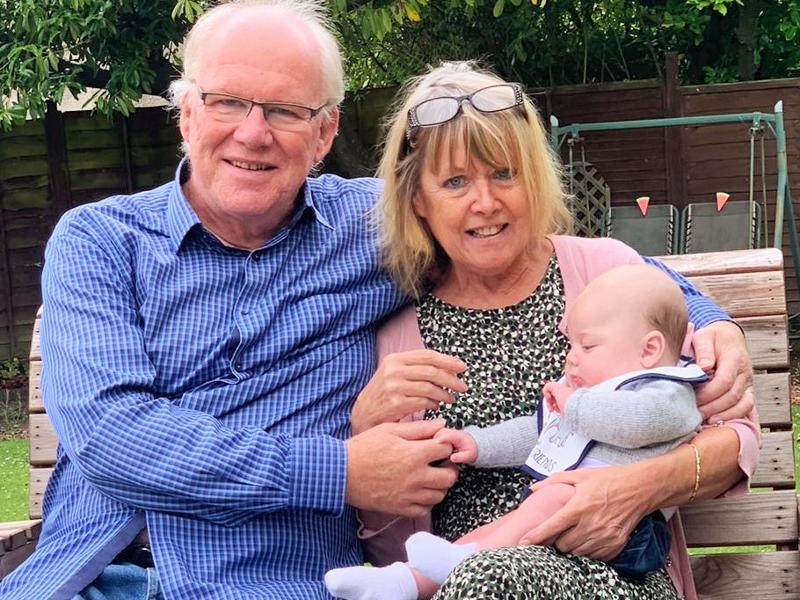 Concerns about an increase in mental health problems prompted by the pandemic has sparked calls for people to talk about their feelings more.

Loneliness, social isolation, fears for job security, bereavement, grief, financial worries and anxiety about Coronavirus are all issues which people may have struggled with during lockdown and Glasgow's Suicide Prevention specialists fear that the impact on people's mental health may become increasingly apparent in coming months.

Stewart is part of a Glasgow team which provides Suicide Prevention Training and he knows from personal experience that lockdown was tough. He became a grandad for the first time during lockdown, however, this wonderful, life-affirming experience proved bitter sweet, as the pandemic meant Stewart and his wife, Marion, couldn't hold their new grandson, Lucca, for the first three months of his life. Technology helped fill the void - Stewart's son, Jonathan and his partner, Sophie, sent lots of baby photos and made daily video calls to sustain his grandparents over the long weeks and months until the restrictions began to ease - but all they longed for was a hug with Lucca.

Stewart said: "We were thrilled by Lucca's safe arrival and quickly became besotted with him, so it was very difficult not being able to see him, except in photos and from a distance, or to hold him in those first months and I know lots of other people will have gone through similarly tough experiences."

As lockdown was gradually lifted and face-to-face meetings were permitted, Stewart's first cuddle with his new grandson was emotional.

He said: " It was a life-changing experience - truly magical. Tears of joy flowed and I will treasure the moment I held him forever. In many ways being unable to hold him for three months made the moment seem all the more wonderful and special."

Sadly, delight at the new arrival was also tempered by the devastating loss of Stewart's father and Marion's mother during lockdown - with nationwide restrictions on funerals compounding the family's grief.

Stewart said: "Lockdown has been difficult for everyone for many different reasons and, after it's been lifted, we are starting to see the emotional impact it has had on people. No-one has experienced anything like this pandemic in living memory. It has been very surreal. Normal life has been restricted and it has gone on for much longer than people expected. We're also starting to realise that it's not over and Covid 19 is going to affect our lives in the future too.

"People haven't been able to access their usual support networks - such as family and friends - and, despite the relaxation of restrictions, some people may still be struggling with their mental health and emotional wellbeing. It's crucial that people don't bottle up those feelings - whether it is grief, loss or frustration.

"People must talk about their emotions and how lockdown has affected them. It's equally important that everyone also thinks about reaching out to a friend, relative or colleague who might be feeling low. A simple phone call and an honest conversation about how you are feeling can make a huge difference."

Unfortunately, Glasgow's annual Celebration of Life event for those affected by suicide at Gartnaval Hospital on Septermber 10th had to be cancelled due to the current restrictions on public gatherings. However, Stewart has recorded a reading by the Tree of Remembrance which will be posted on social media and which he hopes people will share.

He said: "I appreciate it's not the same as the physical event that enables people to remember lost loved ones, but hopefully it will bring people some comfort."

People are also being invited to place a light in their window at 8pm on Sept 10th to show support for suicide prevention, remember a lost one and for the survivors of suicide.

Glasgow has just been recognised for its suicide prevention work. The city is the first in Scotland (and the second in the UK) to receive LivingWorks Suicide - Safer Community status. This is an internationally recognised award bestowed in recognition of the suicide prevention training and suicide awareness work being done in the city over the past 10 years. This includes training delivered by the Choose Life Strategy Group and its partners. These include Glasgow Health & Social Care Partnership (Glasgow City Council and Greater Glasgow and Clyde NHS), Police Scotland, education services, Scottish Fire & Rescue Service and a huge range of voluntary sector groups such as the Mental Health Network, COPE Scotland and Lifelink.

The LivingWorks awards letter stated that Glasgow had "a remarkable and sustained commitment, not only to creating change, but to empowering community groups to be part of that change." It added: "While we are aware that suicide rates have risen in Glasgow... this does not diminish the tremendous impact you have attained in saving lives over the past decade. We believe this is a significant source of hope going forward."

Twelve new suicide prevention trainers qualified prior to lockdown and face-to-face training sessions will resume when Covid restrictions allow. A new educational programme has also been approved which will be rolled out to Glasgow schools and further work is planned to help people bereaved by suicide.

CAPTION: Lockdown was an emotional roller coaster for many people. Suicide prevention trainer, Stewart Moore, has personal experience of its highs and lows and is urging people to talk about their feelings. Stewart is pictured with his wife, Marion, and their first grandchild, Lucca.