Funding of £1.2million to deliver improvements to Tradeston Bridge and the public realm at Tradeston was agreed today (3 December) by Glasgow City Council, with the funding to come from the Glasgow City Region City Deal. Barclays will match this with £1million funding of their own. 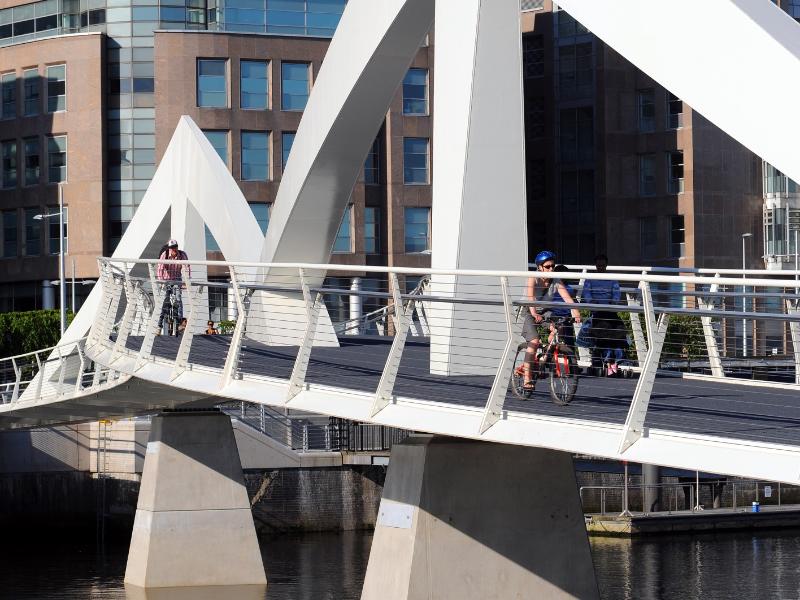 Another element of the work planned to continue the redevelopment of Tradeston - the 'Tradeston Links' - was also discussed by the council, which would see enhanced lighting at three nearby railway underpasses to encourage active travel to and from the emerging Barclays Glasgow Campus.

This work will complement the development of a 3.7 hectares site facing the waterfront at Tradeston, an area that despite its proximity to the city centre and the International Financial Services District, suffered through de-industrialisation with the loss of much of its population and economic base. The developer, Drum Property Group, is creating a major mixed-use development on seven blocks featuring 'Grade A' office space, flats, a mix of local amenities and landscaped public spaces - with Barclays being the principal occupant.

Barclays will host their flagship state-of-the-art global campus on 500,000 square feet of the office space in this development, which will be able to accommodate up to 5,000 people making the bank one of the city's biggest commercial employers as it doubles its headcount in Glasgow.

The council will now progress discussions with Barclays on the formal agreement on the bridge and public realm works.

Councillor Susan Aitken, Leader of Glasgow City Council and Chair of the Glasgow City Region Cabinet, said: "The development of this site is already transforming Tradeston and that part of the Clydeside, and will deliver a tremendously significant and welcome boost to Glasgow's economy. Working with Barclays, this investment in improvements to Tradeston Bridge and the local public realm will play a key part in the regeneration of the area, making it more attractive to the many people who will soon be working and living there."

Vivienne Grafton, Global Head, CRES and Location Strategy, Barclays, said: "The Barclays Glasgow Campus will create world-class facilities for our business as we continue to grow our headcount in Scotland.  The campus will revitalise this area of Tradeston and act as a catalyst for wider improvements including the enhancements being made to the bridge and quay. Our match funding with the City Deal is one of a number of initiatives we are supporting so that our overall investment benefits the community in Glasgow."

Infrastructure Secretary Michael Matheson said: "It's great to see such significant progress in delivering this transformative project, with the partnership between private and public sector working in a positive way to unlock a development that will result in sustainable and inclusive growth for the region. The Scottish Government is a full partner in the Glasgow City Region City Deal, contributing £500 million over 20 years. The investment in this project through the Deal will contribute to the region's economic recovery by creating jobs, and providing the commercial infrastructure to support and attract businesses to Glasgow and the surrounding areas. It also encourages active travel supporting walking and cycling infrastructure in the area."

UK Government Minister Iain Stewart said: "This is a very welcome development which has been made possible by the Glasgow City Region Deal partnership. Together we are investing in clean, green and attractive spaces to revitalise communities and attract business investment. Across Scotland the UK Government is investing more than £1.5 billion into growth deals to ensure every region prospers."

The Glasgow City Region City Deal will see £500million funding from both the Scottish and UK Governments. £113.9million of this funding will be invested in the Clyde Waterfront and West End Innovation Quarter, with the aim of regenerating the Clyde corridor to create a desirable urban quarter that attracts jobs and investment, contributing to the economic growth of the city region. In June 2018, the council had invited applications for funding for projects that could help meet the aims of the project, and Drum Property Group submitted their Expression of Interest in supporting investment for public realm improvements in Tradeston. As anchor tenant, Barclays will lead on the delivery of the public realm work, in partnership with the council.