Dalmarnock Pupil is Hero of Month 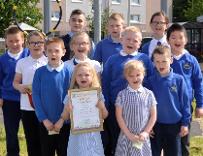 A Dalmarnock Primary School pupil has received a prestigious Clean Up Scotland Hero of the Month award in recognition of her enthusiastic approach to environmentally-friendly activities.

Six-year-old Cadence Saunders is part of the school's Eco Committee and has shown a real commitment to the group - making a significant contribution to the team's efforts to make the school a cleaner and safer place.

The P2 pupil has been commended by awards organisers Keep Scotland Beautiful for her positive attitude and motivated approach to tackling environmental issues. Cadence also composed a song about littering while working alongside other primary schools to clear litter from her local area.

She said: "I am really pleased to receive this award and have enjoyed being a part of the school's Eco Committee. I hope we can encourage even more pupils to take part and help keep the places we play tidy."

He said: "It's brilliant to hear about the work Cadence and her fellow pupils are doing around Dalmarnock Primary School. The pride they are taking in their school and local neighbourhood is inspirational and a shining example of how the city's residents, young and older, can help the Environmental Taskforce keep the city looking its best. Well done to everyone at the school for instilling such a positive and proactive attitude in the pupils."

Nicola Turner, Community Projects Officer of Keep Scotland Beautiful said: "I would like to congratulate Cadence for her enthusiastic approach to keeping her school and local neighbourhood clean and tidy."