Glasgow Stands Up Against Hate Crime 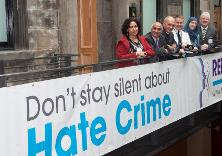 Senior school pupils today heard how everyday discrimination can be the first step toward more serious forms of hostility.

Mr McNeil was part of a United Nations team helping to identify some of the thousands of men and boys massacred and buried in mass graves during conflict in Bosnia in the early 1990s.

Today (Fri) he warned that Hate Crimes such as verbal abuse, spitting and assault are the first steps on the ladder of prejudice. He said attrocities like the Genocide in Srebrenica graphically demonstrate how incidents of "everyday hate", can escalate into unspeakable horrors if left unchecked by society.

A Hate Crime is one where the victim is targeted because of prejudice based on race, religion or sexual orientation, disability or transgender identity.

Glasgow has a Zero Tolerance stance on Hate Crime. Work goes on all year to challenge unacceptable behaviour and to encourage victims and witnesses to report incidents. But city agencies believe many Hate Crimes go unreported- sometimes because people do not realise the abuse they have experienced is a Hate Crime or because they are reluctant to report it directly to the police.

To address this issue, the city has a network of more than 60 Third Party Reporting Centres including housing associations, Central Station, Glasgow Disability Alliance, LGBT Youth Scotland, Govan & Craigton Integration Network and Glasgow Jewish Representative Council. These are safe places which people regularly visit and where staff have been trained by Police Scotland to support victims.

Today a new radio campaign hit the airwaves in Glasgow, highlighting the Hate Crime and urging everyone affected to report incidents. Posters were also posted on Glasgow Subway and in libraries and other community venues. Social media was also being used to enable people to raise awareness and pledge support for a zero tolerance stance on #HateCrime

At today's launch in the Centre for Contemporary Arts, members of Glasgow Disability Alliance performed songs, sketches and poetry highlighting the impact of Hate Crime on disabled people. The Purple Poncho Players took to the stage after Bailie Fariha Thomas, Chair of Glasgow's Hate Crime Working Group, welcomed guests to the event.

Bailie Thomas said: "It is crucial that anyone who experiences or witnesses Hate Crime reports it. Glasgow is leading the way in Scotland in raising awarenesss of this issue and has a zero tolerance stance on this type of disgusting and damaging behaviour.

"Only by speaking out about Hate Crime, can victim's regain their confidence and self belief. By doing so, they can also help ensure it does not happen to others and show perpetrators that it has no place in Glasgow or elsewhere."

The Ann Frank Trust also staged an exhibition at the CCA as part of the launch and Glasgow's Women's Library in Bridgeton will hold personal safety workshops entitled In Her Shoes during the week. Further Hate Crime awareness training will also take place within various organisations across the city.

Chief Superintendent Brian McInulty, Divisional Commander, Greater Glasgow Police Division, Police Scotland, said: "We are committed to tackling Hate Crime in all its forms. Targeting someone because of who they are is unacceptable and can have devastating effects. Police Scotland encourages anyone who has been the victim of, or has witnessed Hate Crime to report it either directly to police or at one of our Third Party Reporting Centre. Don't Stay Silent about Hate Crime."

Find out more about the campaign to combat Hate Crime and Glasgow's Third Party Reporting Centres at www.hatecrimescotland.org

Anyone who needs urgent assistance from Police Scotland should dial 999. In a non-emergency you should dial 101.