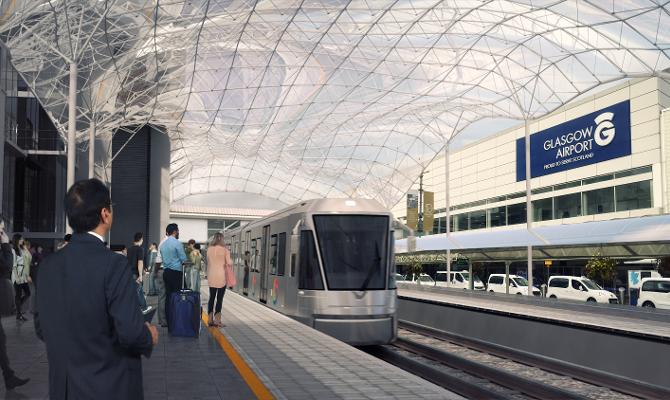 Glasgow Airport injects around £170m to the Glasgow City Region economy every year and businesses have backed the project as essential to ensuring it remains competitive in the years ahead.

The £144m Glasgow Airport Access Project, which is the flagship project for the £1.13 billion Glasgow City Region City deal, will strengthen the city region's link to the world, positioning it as an attractive place to do business and helping to create jobs within the area. Journeys to and from the airport would be transformed as a state-of-the-art system would carry passengers on specially designed tram-trains using both the existing railway network and a new light rail spur from Paisley to the airport.

Councillor Mark Macmillan said: "This is a vital transport development that will bring huge benefits to Renfrewshire and the rest of the Glasgow City Region. Glasgow Airport is key to the success of our local and regional economies. It supports more than 7,300 jobs - 5,200 of which are in Renfrewshire - and this project will help increase annual passenger numbers from eight to 13 million by 2030.

"Improved transport connections will support the growth of the airport and open up the area to tourism and businesses, bringing inward investment and creating jobs for local people. It will also enhance the benefits of our other City Deal projects, which are designed to unlock our economic potential, creating a world class business and commercial location with excellent links across the Clyde and into our town and city centres."

The plans are set to be endorsed by the Glasgow City Region Cabinet in December after being discussed by Renfrewshire and Glasgow City councils in the coming weeks. If approved the system would be operational by 2025, with construction due to begin three years earlier.

Councillor Frank McAveety, Leader of Glasgow City Council and Chair of the Glasgow City Region Cabinet, said: "We've long argued that a new rail link between the airport and the city centre is essential for the thousands of tourists and business travellers who fly into and out of Glasgow every day.

"The airport already supports thousands of jobs but this new rail link, which is the single biggest element of our City Deal, will be the catalyst that takes us to a new level, vastly improving the customer experience and generating even more jobs and inward investment.

"This announcement represents a significant milestone in the journey we've been on for many years. We are committed to delivering this tram-train link and, best of all, the money to pay for it is already in the bank."

They also include creating around 29,000 jobs across the region, working with 19,000 unemployed residents and supporting more than 5,500 people back into sustained employment.

"We welcome the identification of tram train as the preferred option. Not only is it a significant milestone in the Glasgow Airport Access Project, it is the culmination of rigorous planning over several years. It has a very strong business case, with conservative estimates suggesting the airport is set to become one of the busiest train stations in Scotland. This is great news for travellers, and whether they choose the train, the bus or the car, Glasgow Airport will be easier to get to than ever before."

Minister for Transport & Islands, Humza Yousaf, said: "The Scottish Government is committed to working with our partners in the two councils and Glasgow Airport to support their plans for improving surface access to the airport and we have already shown our support for the planned infrastructure improvements that are part of the City Deal through our commitment to provide £500 million funding.

"I recently chaired the inaugural meeting of the high level steering group which provided a good opportunity to discuss the challenges around capacity of the existing rail network on approach to and within Glasgow Central Station and the potential implications that a fixed link could have on future service enhancements in the West of Scotland.

"I look forward to continuing to work with the project team in order to assist them produce a robust and transparent business case which clearly sets out the impacts and a realistic and well informed assessment of all costs of any proposals to ensure informed decisions are made."

UK Government Minister Andrew Dunlop, said: "The Glasgow Region City Deal will transform the local economy, drive economic prosperity and help create nearly 30,000 jobs and I was pleased that the UK Government is supporting it with a £500million investment. The airport link is an important part of the City Deal, so it's good to see this progress and I look forward to working with Renfrewshire and Glasgow City councils and others partners in the months ahead."

A survey of businesses in the Glasgow City Region conducted earlier this year revealed three quarters of respondents view Glasgow Airport as either 'important' or 'very important' to their operations.

Bob Grant, Chief Executive of Renfrewshire Chamber of Commerce said: "A Direct Rail link is crucial to allow our companies to compete more effectively. Glasgow Airport is a key economic driver for the whole of Renfrewshire and greater Glasgow. Our most important asset needs an effective transport infrastructure which will allow businesses to service new markets, attract and retain staff and maintain a competitive advantage.

"We are delighted to see these plans evolve and the demand from the business community is clear: - three quarters of companies surveyed said this link would boost their sales or turnover."

Glasgow Chamber of Commerce Chief Executive, Stuart Patrick, said: "We welcome the commitment being made by the two local authorities to this vitally important air access link.  The Chamber has campaigned long and hard for many years on the issue and this is an important step forward.

"The ongoing monthly growth in passenger numbers at Glasgow Airport and the increasing percentage of inbound visitors and investors who expect a rail link strengthens the business case."

The proposals would see up to four tram-trains per hour running in each direction taking passengers between Glasgow Central Station, Paisley Gilmour Street and the airport.

The interchange point at Paisley Gilmour Street would enable passengers from the Paisley area and from destinations on the Ayrshire and Inverclyde train lines to access the service to the airport without having to travel via the city centre.

Journeys across the length of the route would take 16.5 minutes, meaning a dramatic improvement for people travelling to and from the airport by public transport.

Currently, over 80 per cent of passengers and staff travel to and from the airport by road, with the M8 already suffering from repeated and worsening congestion during peak times.

The new tram-trains would provide a reliable and convenient alternative and help prevent motorway gridlock.

Dr John McCormick, chairman of the Scottish Association for Public Transport, welcomed the progress with the project. He said:

"A tram-rain link between Glasgow Central and Glasgow Airport will seamlessly integrate the ScotRail network with the international air network. The electrically powered vehicles will reduce CO2 emissions generated by surface travel to the airport. The rail link will also provide a reliable journey time, bypassing the increasingly congested M8.

"Importantly, it will raise the profile of Scotland's largest city, providing a fast and reliable journey to the city centre for travellers arriving by air."

The tram-train model was chosen as the preferred option after an appraisal established it offered the greatest opportunity of encouraging people to travel to and from the airport via public transport.

It would reduce the required time for all trips travelling through Glasgow City Centre and Paisley Gilmour Street to the airport, and minimises the need for journeys to include a change of trains.

Both the UK and Scottish Governments will give the Glasgow City Region local authorities £500million each in grant funding for the City Deal, and the local authorities will borrow a further £130million to use for capital investment.

The Glasgow City Region City Deal is expected to give the region a permanent uplift in its GVA of £2.2billion per annum (4.4%); generate 15,000 construction jobs during the construction period and 28,000 permanent additional jobs once construction is complete. It will also unlock £3.3billion of private sector investment.