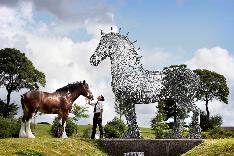 One of Glasgow's much loved Clydesdale horses, Baron, has died at the age of 19.

Sadly, we can confirm that Baron, one of Glasgow City Council's famous Clydesdale horses has passed away.

Handsome bay Baron was an award-winning horse who was adopted by the council from World Horse Welfare as a foal and spent years bringing joy to generations of city children.

Along with his companion, Duke, he was a model for the world renowned Kelpies in Falkirk and the Heavy Horse statue beside the M8 - both by artist Andy Scott.

Standing 18.1hh, Baron was a local celebrity - attending gala days and events as well as helping to provide traditional dray rides with Duke at Pollok Country Park where he was stabled before retiring in 2014.

As well as being adored by the public, Baron was loved by staff at the council's stables. He was even guest of honour at Head Carter, Lorraine Clark's wedding in 2010 where he was a hit with guests.

Lorraine said: "Baron was so trusting and great with members of the public. He was such a pleasure to work with - always kind and willing - a real gentle giant! He served Glasgow well and we couldn't be prouder of him!"

A spokeswoman for Glasgow City Council said: "Baron was a handsome and good natured animal who brought joy to generations of Glasgow children. He was a true local celebrity as well as being known around the world as the inspiration for the stunning Kelpies.

"Baron was originally a rescue horse who was rehomed by the council from World Horse Welfare. He went on to win multiple awards including the Royal Highland Show's Overall Ridden Champ and, despite being retired, he was still adored by the public and staff. He will be much missed by many!"