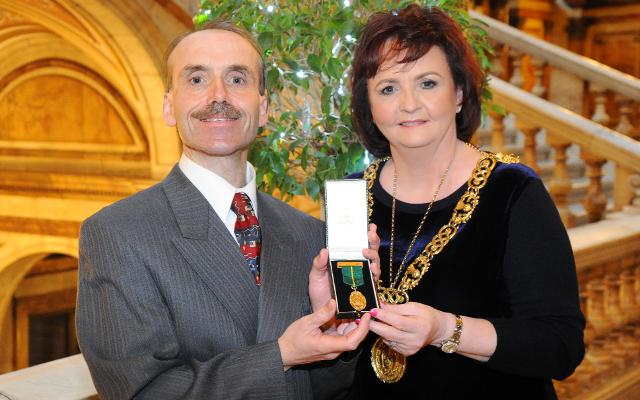 Football legends, a Bafta-award winning actress, a Paralympian, a head teacher, an entrepreneur and a street sweeper were among an array of talent honoured by Glasgow's Lord Provost.

The local heroes were guests of honour at a VIP civic dinner hosted by Lord Provost Sadie Docherty at the City Chambers.

Councillor Docherty paid tribute to the achievements, determination and dedication of the recipients at the final awards of her term as Lord Provost.

Celtic Football Club's famous Lisbon Lions were presented with The Loving Cup to mark the 50th anniversary of their historic European Cup win in 1967 - when they became the first British team to lift the trophy. The Lord Provost said the players were great sporting ambassadors for the city and their achievement was still a source of huge pride.

Jim Craig of the Lisbon Lions said: "We are delighted to receive this honour from the city.  It was totally unexpected, but we are really happy to receive it.

"Glasgow has such a dear place in all our hearts and the people of the city have always been so kind to us. It is very humbling therefore to be recognised in this way and we sincerely thank the Lord Provost for this gesture."

Mr Khushi has been the driving force behind the expansion and global success of the Glasgow based family company which now employs more than 1500 people.

The 60-year-old businessman said: "I'm humbled and honoured to receive this award. I was born in Glasgow and Trespass was born in Glasgow. The family company has grown and is now international. It has won several awards but I can honestly say, that providing the uniforms for the 2014 Commonwealth Games was one of my proudest moments, and it is a true privilege to receive this award from the Lord Provost."

The Lord Provost said: "I was delighted to nominate Frank because of the meticulous job he does in Mount Florida and Battlefield. I do a lot of shopping in the area and the local shopkeepers all know him. It is a very busy patch, especially when the football is on but Frank's work is absolutely outstanding.

"He really goes above and beyond to keep the place clean and deliver a first class service to the area. One of the local shopkeepers told me Frank deserves a medal for the work he does - and I'm delighted to present him with this one. He is a very deserving recipient!"

Frank, 51, said he was "very proud" to receive the recognition and described the award as a "blessing".

He added: " It's an honour to serve the city of Glasgow. Thank you very much for this award and thanks to all the people at Polmadie depot for their support."

Ruth said: "Nancy is a teacher by vocation not career. She is driven by heart as well as her head and is literally always available. She is more than a head teacher, going well beyond her remit to support pupils and their families.

"I've seen her work through the summer holidays to keep her school open for lunch clubs and family activities. Nancy is the person some of our most vulnerable parents go to when they need advice or a hug or just to fell valued and believed. Where some people might see deficits in a person, Nancy sees potential, talent and hope."

Nancy had no idea she had been nominated and was stunned when she received the letter informing her.

She said: "I'm shocked and delighted to receive the award, but I had to read the letter twice then phone up, to check it was right before I believed it.

"I love my job and am lucky enough to work with a great team who all think like me and go the extra mile to make sure everything is right for our children. This is an award for the whole team and the school community not just me."

Bafta award-winning actress, Juliet Cadzow, was presented with the award for Performing Arts.

Juliet has appeared in film and TV classics including the Wicker Man and children's TV hit, Balamory. She is currently starring in River City as mum, Suzie Fraser, but despite her hectic work schedule, Juliet still finds time to volunteer at Glasgow Caledonian University where she is a Cultural Fellow.

The accomplished actress is credited with mentoring, motivating and inspiring performing and visual arts students and was nominated for an award by the university's Principal, Professor Pamela Gilles CBE FRSE.

Record-breaker, Jo Butterfield MBE, is a Paralympic Gold medal winner, a member of the Scottish Athletics board and was vice-captain of the Caledonian Crushers wheelchair rugby team. Jo moved to Glasgow from Yorkshire in 1997 to study and in 2011 was diagnosed with a tumour on her spine which resulted in her being paralysed below the waist. Despite this life-changing event, Jo powered on to become one of the world's best parasport athletes - competing in the club and discus throw - earning a gold medal at the Rio Olympics and an MBE in the New Year's Honours. She was nominated for an award by a member of the Tinto Primary School PTA.

The Honourable Patricia Fraser accepted an award on behalf of the Fraser Foundation - one of the biggest charitable bodies of its kind in Scotland. The philanthropic foundation was started by retailer the late Sir Hugh Fraser and has been helping to enhance Scottish lives for 57 years. In the last five years alone, the foundation has donated around £9m to hundreds of worthwhile projects. This has included £300,000 to the rebuilding of the fire ravaged Glasgow School of Art and £100,000 to extend the Royal Conservatoire of Scotland complex.

Patricia said: "It was totally out of the blue but I'm delighted to accept this award on behalf of the Foundation and I know my father and grandfather would be very proud as well as they started it all off."

The Chief Operating Officer of the College of Medical, Veterinary and Life Sciences at the University of Glasgow, Dr Carol Clugston, received an award for work in the field of health.

Dr Clugston has played a major role in the planning, funding and development of the academic infrastructure at the new Queen Elizabeth University Hospital on projects totalling over £70million since 2012. These include a Teaching & Learning Centre, Clinical Research Facilities, the recently-opened Imaging Centre of Excellence (home to Scotland's first ultra-high-resolution 7 Tesla MRI scanner), and the development of the £20m Stratified Medicine Scotland Innovation Centre. As well as benefits to patients, these projects will create up to 700 jobs and bring £100m to the local economy, and ensure Glasgow is recognised as a global centre of excellence for biomedical innovation.

Carol said: "It's a privilege to be working at the University of Glasgow and to be doing a job that doesn't really feel like it's a job.

"Although this award is in my name, I see it very much as recognising the whole team that has been involved in developing all the new academic infrastructure at the Queen Elizabeth University Hospital and implementing the vision that has been led by Professor Dame Anna Dominiczak in Precision Medicine."

Barmulloch resident Bernadette Hewitt was honoured for her work in the community where she has been active in everything from the Parents Teachers Council at St Catherine's Primary to the management committee of Unity Homes and the Board of Barmulloch Community Development Company. She was also instrumental in securing a former church to be converted into the much-loved Broomfield Centre which now houses the Rob Roy Boxing Club and Hope House, a centre for vulnerable families.
Bernadette was nominated by Bailie Gerry Leonard who said: "Bernadette has been and will continue to be a hard-working and caring person within the community. She is always happy to help out and provide assistance wherever she can."

Marathon man, John McGurk, was presented with a medal for his charity fundraising. The former soldier was born in Glasgow and now lives in Germany. He experienced poverty during his own childhood and vowed to help make life better for youngsters as an adult. John has been fundraising for disadvantaged children for 24 years and has raised millions of Euros all over Europe through his running.

John always runs in a kilt and last year, he raised a phenomenal £54,247 for Scottish youngsters - donating the money to the charity Children 1st.

Alison Todd of Children 1st nominated him for the award saying : "He is a remarkable man. He is determined to ensure no child should go through what he did and has made it his ambition to raise as much money as possible to support children. I know he would burst with pride to be honoured by his home town of Glasgow."

Guests at the event were entertained by Piper, David Wotherspoon, the City Voice Choir, Piper Ewen Brindall and the Erskine String Quartet.