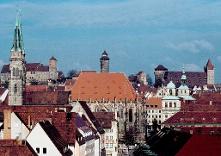 Glasgow's first formal 'Twin', Nuremberg has been a consistently active partner since the signing of the Agreement in 1985. Nuremberg has a population of 510,600 and is situated in the important economic and commercial region of Northern Bavaria. The European Union defines Bavaria as a 'Gateway' region due to its geographical position, which makes Nuremberg ideally placed to take advantage of new markets opening up in Eastern Europe. Within Germany, Bavaria is ranked amongst the top ten economic regions.

Fortune Works is run by ENABLE Glasgow, and provides meaningful economic activity to 120 adults with learning disability, through its assembly and fabrication work, garden centre, community café, and craft making division. Most importantly, it supports service users to play a real role in community life, moving away from the traditional model of social care to being part of a thriving social enterprise. A major financial investment over the past year from the Scottish Government, Glasgow City Council, and ENABLE Glasgow has enabled the service to expand into an additional building and offer 40 new places.

Through the new link with Noris Inklusion, ENABLE Glasgow hopes to gain new knowledge on how to further develop the service. To date there have been two visits to each twin city by service users and staff with plans for a staff exchange later this year.

Anne Ainsworth, Fortune Works Manager, said "Fortune Works is a key part of the economy of north-west Glasgow and of the lives of everyone who uses the service. We are immensely proud of what has been achieved by our service users so far, and we are very excited by what the future holds. By making international connections with our colleagues in Nuremburg we hope to help move our work on to another level, and further prove that with the right support people with learning disability can make a valuable contribution to the economy".

This EU funded project, involving Glasgow and Nuremberg looks at the systems in place in each city for supporting young people to make the transition from school to employment. The two year project culminates in two conferences in 2017, one in Nuremberg and one in Glasgow, to disseminate the results of the projects. Programmes for each conference are attached for information.