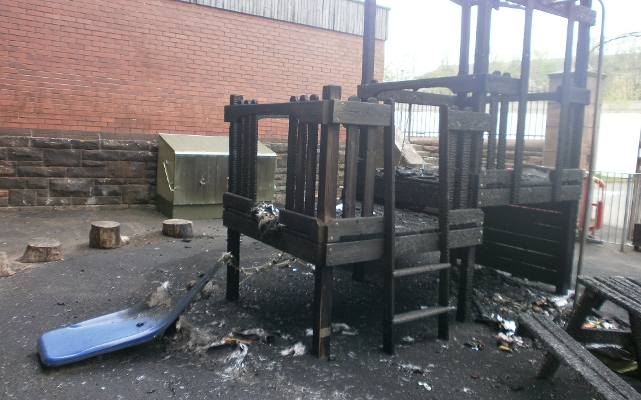 Mindless vandals have torched play equipment at a Glasgow nursery leaving the toddlers who use it devastated.

Shocked staff at Elmvale Nursery Class discovered the charred remains of a climbing frame, picnic bench and rubber safety matting on arrival at work after the bank holiday weekend.

Around 70 youngsters aged 3-5 years attend the nursery class, part of the Elmvale Primary School building in Springburn, but the upset tots are unable to use their own playground after yobs targeted their grounds.

Gail Houston, Deputy Head of the nursery class, said: "The damage is really quite shocking. One of the staff showed me a photo of the damage but when I saw it for myself, it was horrible. The people who did it obviously have no regard for the children who use it. It's wanton vandalism. The climbing frame and rubber matting are completely black and charred.

"The children are really upset. They want to go out and play, but they can't use their playground at the moment. The climbing frame was very popular, the children used every day. It would cost thousands to replace it and the matting underneath.

"We're in the middle of a refurb at the moment. Last week staff and parents were out painting planters in the nursery garden and preparing for the beds for planting. It was looking good, so it makes this vandalism all the more upsetting."

A spokesman for Glasgow City Council said: "It is such a shame that youngsters at the nursery have to suffer because of thoughtless vandals. Everyone has been working hard to make the garden and playground look good. The children love playing outdoors and they are so disappointed that they can't use their playground today. They are young, and something like this is unsettling, but the nursery staff are doing a great job of reassuring them."

The incident has been reported to Police Scotland.