Pupils Clean Up on Road to Hampden 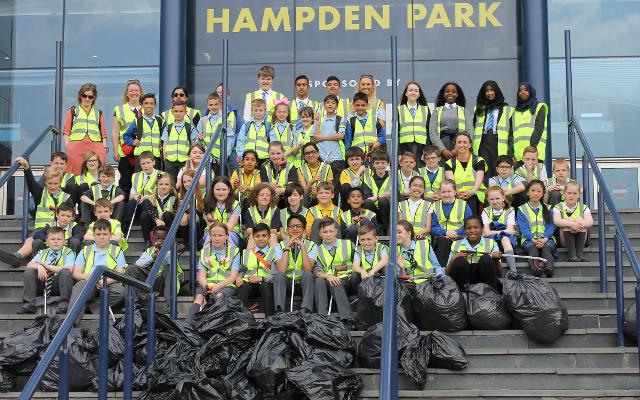 More than 60 Glasgow school pupils staged a mass clean up on the city's south side before enjoying a tour of Hampden Park and the Scottish Football Museum.

Young people from six schools took part in a clean-up with the Environmental Task Force while walking from their classes to the stadium.

Teachers and pupils from Battlefield, Mount Florida, Blackfriars, Kings Park and Croftfoot primaries and Holyrood Secondary School all took part in the annual event which first took place in 2014.

On the road to Hampden, the pupils collected around 70 large bin bags of rubbish which had been dropped on the streets and in greenspaces.

Eddie  MacDonald (aged 11) from Battlefield was thrilled to visit the national stadium but was shocked by the amount of litter people drop.

He said: "It's just laziness when people drop litter. They could easy take it home instead of dropping it in the street. It was quite interesting to see the kind of things that people drop though. I found batteries, glass bottles and big cans of juice - some of them were still full. Our litter bag was heavy when we'd finished.

"I'm excited about seeing the stadium and football museum because I've never been to Hampden Park before."

Ethan Shand (aged 10) also of Battlefield Primary School said he was happy to do his bit to keep the local area clean.

He said: "It makes us feel nice and helpful to do a litter pick. It's not good to drop rubbish though, because other people have to clean it up. We found a big fence with tons of rubbish behind it but two metres away there was a bin."

After their tour of the stadium and the football museum, the pupils enjoyed lunch which had been donated by local businesses. These included McDonalds (fruit and water), Greggs (flapjacks), Tesco (sandwiches) and Warburton's (bread and pancakes).

She said: "The young people have all been great. They got plenty of exercise on the walk to the stadium and learned about the environment and their communities as well as the importance of disposing of litter responsibly. They collected loads of rubbish. I was really impressed by their hard work - especially as the weather was so warm!

"I'd like to thank the schools, Hampden Stadium, the Scottish Football Museum and all the other businesses who supported the event."

All the rubbish collected during the event was uplifted for disposal by the council.