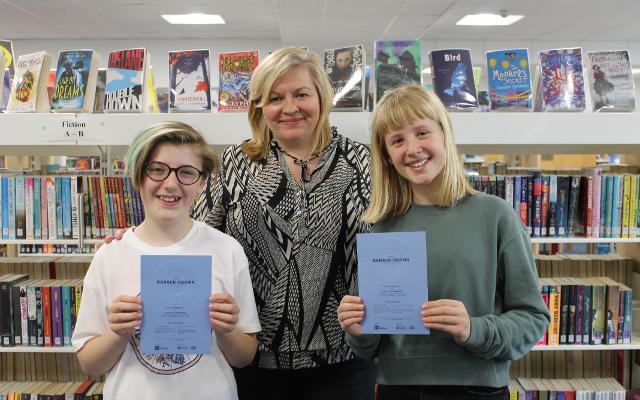 A Glasgow teenager will meet former US President Barack Obama tomorrow after winning the invite in a writing contest.

Mila Stricevic, 13, of Hyndland Secondary School will read her winning poem, If I Ruled Scotland, in front of Mr Obama, Sir Tom Hunter and other VIP guests at Edinburgh International Conference Centre.

Her twin sister, Anna, and seven of her school mates will also attend the prestigious seminar and banquet after Mila won a competition run by the Hunter Foundation.

Mila, who is interested in social justice and wants to work for Amnesty International when she is older, is a huge fan of Obama whom she described as "inspirational". Instead of sitting at home watching TV tomorrow evening, she'll be reading her poem in front of the former President and the other VIP guests.

Mila said: "I'm very excited but overwhelmed, because I've never experienced anything like this before. I didn't expect to win the competition. My sister Anna, did illustrations to go with the poem but they got ruined in the rain and we only managed to submit the poem on the competition's closing day.

"I was really shocked when I found out it had won and I'm really nervous about reading it in front of Mr Obama. He is really inspirational, everything he did was done with integrity. Plus he was the first black president of the United States."

Mila entered the schools competition with support from her English teacher Mandy McGuire after her mum, Rachel, spotted it advertised in a newspaper.

Mrs McGuire said: "We are so thrilled for Mila and the other children who are going. It is the opportunity of a lifetime. It has all been a bit of a whirlwind but everyone is very excited."

Mila received a phone call from Sir Tom Hunter after finding out she had won an audience with one of the most influential men in the world.

The teenager said: "I didn't expect to speak to Sir Tom personally but he said he filled up when he read my poem. It was really nice."

Mila and Anna's parents, Rachel and Milorad, are delighted, if a little stunned, that their daughters are both attending the high powered event.

Mila said: "My mum screamed when I told her my poem had won!"

If I ruled Scotland here's a law I would pass
When the sun shone no kids were in class
Instead we'd play rounders or read in the shade
(after all it's unlikely to last more than one day!)

If I ruled Scotland here's what I would do
I'd keep the night safe from crime and misuse
I'd treat prisoners like humans - guide them back to a life
Filled with prosper and respect, doesn't that sound nice?

If I ruled Scotland here's some stuff I would ban
Like Mars Bars deep fried or those pies in cans
But don't fret, even though it has a strange hue
I would never get rid of our loved Irn Bru!

If I ruled Scotland I'd invest in our schools
To ensure rich or poor, our kids had all the tools
To puruse their own dream, regardless of class
And make Scotland a nation where no one comes last

If I ruled Scotland here's something I'd try
We'd fund our NHS, to keep it alive
Then when people get sick, no matter how deep their pockets
We'd always have medicine on hand to stop it

If I ruled Scotland I wouldn't allow
Any racism nonsense to interfere with my vow
That no matter the colour or tone of your skin
We're all Jock Tamson's bairns and that means we're all kin.