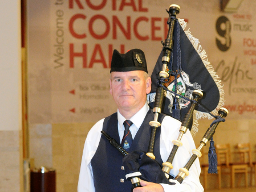 David was the original Pipe Major of The Grade one City of Glasgow Pipes and Drums in the 1990s. This band was solely sponsored by Glasgow City Council.

He then played with the world famous Shotts and Dykehead Caledonia Pipe Band and won the Grade one world championship in 2003 and 2005.