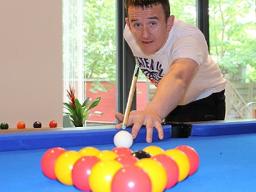 After being homeless on-and-off since a teenager, Derek Bradford, (34), can finally see light at the end of the tunnel after accepting help to quit drugs.

Currently doing well in rehab and about to start treatment for Hepatitis C, Derek says he began using drugs as a coping mechanism to help him sleep on the streets or in hostels after being thrown out of home aged 16 for getting into trouble.

Derek has spent years living in and out of hostels and with failed tenancies. He has survived HIV scares and contracting Hepatitis C, been hospitalised five times in a year and warned he could lose his legs if he didn't stop injecting. Latterly, he was sleeping on Glasgow's Argyle Street, where he repeatedly rejected help from the city's Street Team who offer homeless people support to get medical treatment, food, clothing and shelter.

Derek, originally from outwith Glasgow, said: "The city centre is safe. It's covered with CCTV cameras and it's a good place to make money.

"When you're stuck in that life, you can't see a way out. I kept telling my Street Team worker Billy to f*** off when he offered me help, but he wouldn't give up. He kept coming back again and again - asking me to go for help and said he'd come with me.

"It's not that I didn't want help, but you want everything immediately. You're not interested in going to appointments and that. You just want to score and get money for drugs.

"In the end I was sick of the life - it's demeaning. I woke up in the Drug Crisis Centre one morning and knew I had to do something."

Workers organised a six month rehab placement for Derek who has now been "clean" for more than a month. After completing his treatment at Glasgow's Cothrom-Eile project (Another Opportunity in Gaelic), he plans to do voluntary work with some of the services which put him on the road to recovery. He also hopes to study for care qualifications.

Glasgow's City Ambition Network (CAN), a partnership of public and Third sector organisations, has also secured him a house and will ensure he receives life skills support to cope with tasks like paying bills and dealing with utility companies.

Determined to stay off drugs, Derek's planning to use his own life experience to encourage others in the same situation to accept help.

He said: "I've got almost 20 years personal experience and I want to help others. It's mind-boggling how far I've come. I've learned a lot about myself and I feel a lot better. It's scary and exciting to think about getting a new house. But I know I've a good support team around me and I'm positive about the future."