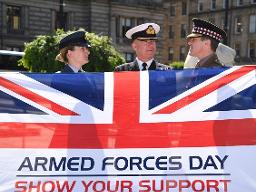 The Armed Forces Day flag ceremony is held annually to signal the city's forthcoming Armed Forces Day (AFD) celebrations hosted by the Lord Provost, in her role as Lord Lieutenant. This years AFD will be held inGeorge Square on Saturday 30 June from 11 am.

"Glasgow was the first local authority in Scotland to hold an Armed Forces Day and we strengthened this support by signing up to the Armed Forces Community Covenant.

"I'm delighted to take the opportunity to welcome our armed forces and their families to Glasgow and to express our gratitude for their service and bravery.""Armed Forces is appropriately, always held in George Square home to the city's Cenotaph - a memorial to men who lost their lives in the First World War."