A report to a Glasgow City Council committee outlined the results of a public consultation on the proposals for a major public realm project on Byres Road, to be funded by the Glasgow City Region City Deal. 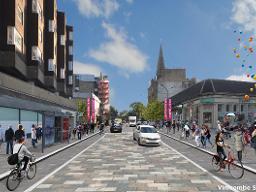 At the council's Neighbourhoods, Housing and Public Realm Committee today (2 October) the findings of the consultation were presented, and these findings will help to inform final designs before construction work begins.

City Deal funding has been allocated for the public realm scheme on Byres Road in order to improve place quality and physical connections with the University of Glasgow, and this work will both complement the significant capital investment proposed the by University through its campus redevelopment and support the ongoing economic contribution of Byres Road as a major retail and visitor destination for the city and its visitors.

The initial design proposals for Byres Road were set out in the Byres Road Placemaking Report which was approved by the council in January 2017, and which aimed to create a people-focussed place that enhances the pedestrian experience, promotes social interaction and dwell time, enhances the economic vibrancy of shops and services and improves its cycle-friendliness and environmental performance.

From that point, a number of consultation events, design workshops and in-street shopper surveys have informed the concept design. Key features of the design included:

These concept designs were then published for a public consultation between 23 May - 27 June this year - with 550 responses received - and some of the key findings include:

Councillor Anna Richardson, City Convener for Sustainability and Carbon Reduction at Glasgow City Council, said: "Byres Road is a key destination in Glasgow, valued by residents and visitors alike for its mix of shops, restaurants and cafes, as well as being a place of work or study.  This project offers an opportunity to improve the street for everyone who uses it, and enhance its attractiveness to businesses along it. By taking into account the findings of the public consultation, we will be able to create a Byres Road that meets the economic, social and environmental needs of everyone with a stake in it."

Council officers have reviewed the consultation findings and are now considering measures that could be introduced in order to improve the proposed cycle infrastructure and reduce traffic volumes while maintaining the quality of the pedestrian environment which was identified as a strength of the existing proposals.  The introduction of design changes will be influenced by further engagement with key stakeholders and completion of additional traffic modelling that will test a number of scenarios that aim to reduce traffic volumes.  As a result of this additional consultation and design work, the project is now estimated to begin on site in late 2019.