Glasgow is to welcome yet another major film production to the city later this month. 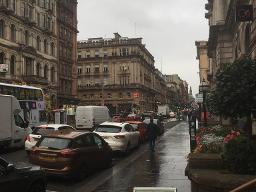 The Universal Pictures production, which will consist of a secondary film unit of 200 crew, will film on a number of city centre streets including George Square and St Vincent Street.

It is anticipated that the production will have a significant impact on the city's economy.

Information on the production is being given to local residents and businesses.

Councillor David McDonald, Depute Leader of Glasgow City Council, said: "It is great to see another major film production coming to Glasgow, another example of the confidence the industry has in the city's ability to host shoots of this size. The council's Glasgow Film Office has been working closely with the production to identify locations and making sure the shoot goes smoothly as possible, while minimising the impact on the daily life of the city. Major productions such as this bring a great boost to the local economy. Glasgow loves cinema, and it is good to know that we will see the streets of the city shown all over the world when this film is released."

Yesterday, a Glasgow City Council committee noted a report that the council's Glasgow Film Office had attracted and assisted film, broadcast and advertising productions that had generated around £300million for the city's economy since it was established in 1997.

More information on the Glasgow Film Office is available at: https://www.glasgowfilm.com/index.aspx?articleid=11533.