Glasgow Gets Ready For Winter 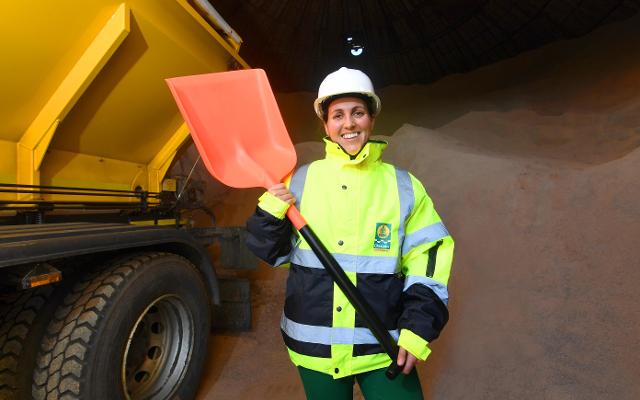 Glasgow has already taken delivery of 24,000 tonnes of grit as part of the city's preparations for Winter.

With the first gritting of winter 2018/19 fast approaching, the council has also assembled a fleet of 160 vehicles to deal with snow and ice, deployed almost 1500 grit bins in neighbourhoods across the city and assembled a squad of volunteer winter wardens for local areas.

Two cycle routes in the city have been identified for priority 1 action for the first time as part of a pilot programme to support active travel over the winter months. A new web-based story map has also been developed which will explain how and where the council allocates it resources in response to wintery weather.

Last year winter gritting began on October 29 and with arrival of the 'Beast from the East' in late February 2018, the council concluded its winter operation in April after using 23,850 tonnes of grit over the course of 121 separate days of action.

With this year's Winter Maintenance Plan placed before the Environment, Sustainability and Carbon Reduction Committee, the city is again gearing up for the winter months. Under the plan, the council uses daily, tailored weather forecasts to gauge the predicted impact of snow and ice on the city, which then feeds into the priorities for action.

The primary focus on each day of winter action is to treat over 900 kilometres of priority 1 carriageways (about half of all roads within the city), priority 1 footways and the priority cycle ways. The aim of the winter action is to facilitate as far as reasonably possible safe passage of pedestrian and vehicles over public roads.

Councillor Anna Richardson, City Convener for Sustainability and Carbon Reduction, said that after the battering Beast from the East delivered to Glasgow earlier this year, the city will be bracing itself for round two. But she stressed the city's residents should take confidence from the preparations that are already in place.

Councillor Richardson said: "Last winter was one of the worst on record, but we managed to keep the city moving in the toughest of circumstances.

"As ever our gritting teams had a vital role to play and were out day and night to keep roads and footways as safe as possible. The volunteer winter wardens rose to the challenge, marshalling public spirited individuals in neighbourhoods all across the city to tackle local snow and ice. And the city's 1500 grit bins were an invaluable resource for members of the public determined to do their bit.

"As ever we always seek to refine and improve our plans and people can have faith that we are prepared in case the worst happens again.

"I am delighted there will be greater support for those who travel to and from the city centre by bike. It's vitally important that active travel is still an option even during the depths of winter.

The pilot programme for cycle routes will cover South West City Way, West City Way and the link with Kelvingrove Park. These routes will be gritted or cleared any time there is an instruction for winter action on the city's priority one footways.

The Winter Story Map will be available on the council website this month. It will help people identify the nearest priority one route to them. Refills of grit bins can be ordered through the My Glasgow phone app.

More information on the Winter Maintenance Plan 2018-2019 can be found here.