Access to the City Chambers during Hollywood film shoot 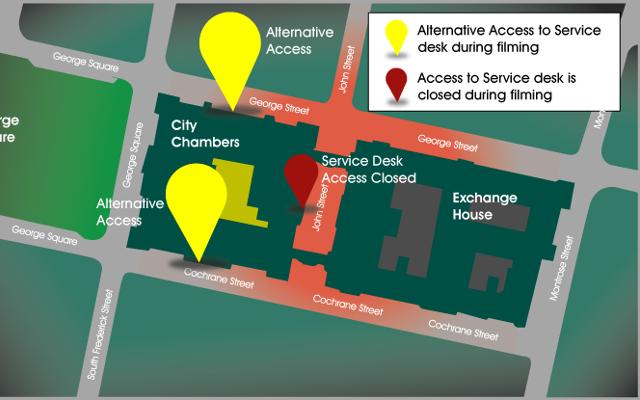 Work on a major Hollywood film production is due to begin in Glasgow city centre on Wednesday, October 24 for five days. This will involve a number of road closures in the city centre that will come into effect from Tuesday, October 23 onwards.

Many of the scenes will be staged immediately around the City Chambers on Wednesday, October 24 and Thursday, October 25, which will affect access to the building for customers and visitors during that time.

Alternative arrangements will be put in place on these days for customers who wish to attend at the Service Desk and for visitors who have business in Chambers East.

Access to the Service Desk will be via the Gatehouse entrance to the City Chambers at 64 Cochrane Street and also through the arch between 285 and 249 George Street that leads to the main quadrangle of the west building of the chambers.

Stewards and signage will be in place to direct customers to their final destination.

Visitors who would normally attend at the reception desk at 40 John Street on October 24, 25 are now asked to enter Chambers East at 20 Cochrane Street.

Anyone who is due to attend at the Licensing and Regulatory Committee on October 24 or 25 should access the Burgh Court Hall through the entrance to Chambers East at 235 George Street.

It should also be noted that members of the public may be asked by stewards to wait at certain points around the building while filming is underway. This will only be for a short period.

But people seeking to make appointments on time should expect potential delays and plan their journey accordingly.

Full details of the road closures can be found here