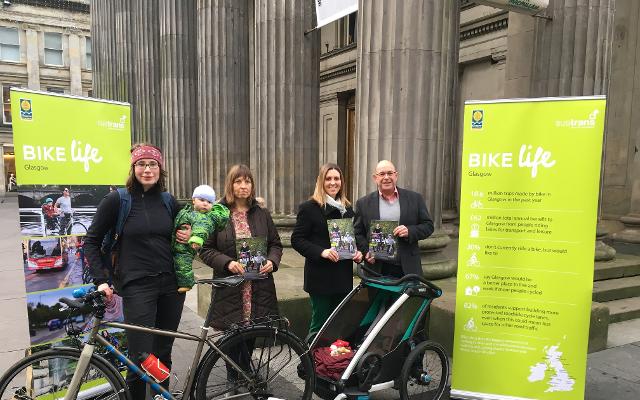 The UK's most comprehensive assessment of cycling in cities, Bike Life, has revealed that eight out of ten people in Glasgow (82%) support building more protected roadside cycle lanes even when this could mean less space for other road traffic.

The report, the first of its kind in Glasgow, also found that cycling was seen as the least safe way of travelling around the city with 79% of people thinking that safety needed to be improved.

Run by Sustrans Scotland in partnership with Glasgow City Council, Bike Life is part of a wider piece of research by Sustrans covering 15 cities across the UK, assessing cycling development, attitudes and behaviour in each city.

A representative sample of more than 1,100 residents in Glasgow were interviewed to find out more about their cycling habits, satisfaction, and the impact of cycling in the city.

And, despite concerns over safety, more than two thirds (67%) reported that more people riding bikes would make Glasgow a better place to live and work whilst over three quarters (78%) of Glasgow residents said they would like to see more money spent on cycling.

The city's delivery programme also recently received a major boost with match funding from the Scottish Government through Sustrans Scotland's Community Links PLUS programme for two new projects, one in Glasgow's south side and one in the Woodside area of the city. This major design competition recognises transformative proposals that promote walking and cycling.

As an increasing number of people choose to walk or cycle in Glasgow, the health, social and economic benefits are clear. Bike Life calculated that 18.6 million trips were made by bike in Glasgow in the past year, equating to a £62 million benefit to the city based on aspects such as vehicle costs, health, travel time and congestion. This also means 7,551tonnes of greenhouse gas emissions are saved annually, equivalent to the carbon footprint of 1,640 people.

Councillor Anna Richardson, City Convener for Sustainability and Carbon Reduction, said: "Bike Life Glasgow is a fantastic document that shows how keen the people of Glasgow are for us to continue to build ever more safe, inclusive cycle infrastructure.

"It highlights very clearly the benefits that come to a city that is dedicated to investing to make cycling safer, in terms of health, economy and environment. These findings will only strengthen our commitment to designing a city that is safe for anyone who wants to cycle."

"Glasgow City Council can rest assured that they have the backing of the public to build on the work they have already started to enable people to choose healthy, clean and cheap journeys by getting on a bike."

Dr Paula Regener, who lives and works in Glasgow, also attended the launch of the Bike Life report as she is a keen cyclist.

The 31 year-old researcher at Glasgow University says that the bike is her main mode of transport and, as well as using it to travel round Glasgow she has recently started taking her young daughter, Harriet, in a trailer with her when on holidays.

Paula says she feels Glasgow has a lot of potential to become a world leading city where cycling is the way to get around. "I feel that much more people want to cycle in Glasgow but that there is not enough cycling infrastructure available," she explains.

"We need segregated cycle paths on all major roads and sheltered cycle parking for people who live in tenement buildings just to name a few things."

She adds that becoming a parent has made her more aware of the issues surrounding congested city centres.

She added: "Now that I have a young daughter I have become even more aware of the poor air quality on Glasgow's streets and cannot believe that the city centre is still gridlocked with cars.