Appeal for families of men who died during Cyprus Emergency 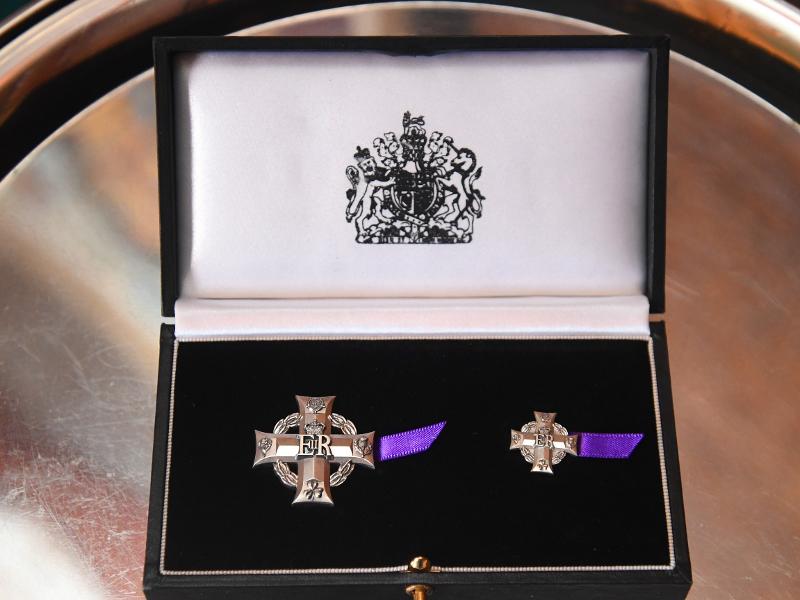 An appeal is being made to trace relatives of men killed serving in the Cyprus Emergency Peace Keeping Force - often referred to as the 'Forgotten Conflict'.

It follows the most recent award of the Elizabeth Cross to two affected families by Glasgow's Lord Provost Eva Bolander, in her capacity as Lord Lieutenant, late last year.

The Lord Provost said: "It's important that families receive recognition of their loved- one's service. Conflict visits great costs on everyone who loses a member of their family. It's my privilege and pleasure to be able to present these Elizabeth Crosses. I know it's a source of great pride and comfort to those left behind."

James McManus (74), the brother of Leading Aircraftman Joseph McManus (19); and Robert Boyle Mathieson (60), the son of Private James Boyle (21), proudly accepted the medals and spoke poignantly of their loss and grief at a special ceremony held in the City Chambers last November.

The men were killed in separate road traffic accidents while deployed on that island mission. Joseph on 18 May 1956 near Nicosia and James on 17 November 1958 in Nicosia. They are buried at Wayne's Keep, the British Military Cemetery, in Cyprus.

James recalled the shock of learning of his big brother's death. "I was out in the back garden playing. I remember seeing my mother at the back door crying with a Telegram in her hand.

"Unfortunately the way things were in these days your parents didn't tell you anything. I was just told he was dead. It was hard as an 11 year old to take in. It's great to be here today after so long."

Joseph, known as Joe, was born on 11 March 1937 to Peter and Annie McManus from Blantyre. His siblings: Ann, Margaret, Kathleen, Christine and James.

He was educated in Motherwell and Bishops Waltham before enlisting with the RAF on 10 June 1955 aged 18 years. Following completion of his basic training at RAF Hednesford in Staffordshire, he was posted to RAF Weeton in Lancashire. There he passed his trade tests qualifying him as an Aircraftman 1st Class in engine mechanics in November 1955.

Joe was assigned to 103 Maintenance Unit at RAF Akrotiri, Cyprus on 21 December 1955 to support the RAF's Middle and Far East operations. He was also regularly detached to the island's other air base at Nicosia.

Bases that would become increasingly strategically important as the British Air Force pulled out of Egypt and converged on Cyprus.

Robert, the son of Pte Boyle, was less than six months old when his father died. He grew up knowing nothing about him. His mother Margaret, known as Greta, remarried. Robert took the name Mathieson as an infant. His stepdad was Alex Mathieson and the family lived in Castlemilk and Bridgeton.

Robert remembers coming across the Telegram about his dad's death, when he was around four years old. However, no-one spoke about him. It was only by chance, listening to the radio, he learned about the Cyprus Emergency Peace Keeping Force and heard his father's name. Allowing him to finally piece together fragments of his past.

Robert also revealed he'd only recently found out his father had brothers and sisters: Margaret, Elle, Mary, Dominic, Thomas, Henry and Francis. The children of John and Elizabeth Boyle.

Robert, who runs the Kilt Centre in Hamilton, said: "This medal is the catalyst to continue my investigations into my father's past. I'm looking forward to finding out more".

Pte Boyle was born in October 1935 and joined up aged 21 years. He was posted to 5 Training Battalion, Blenheim Barracks, Aldershot, for basic training in February 1957.

Les Smith (80) from Lancashire, who also served in Cyprus, with the Royal Horse Guards (The Blues), is trying to track down relatives of the 372 young men who died during the 1955 to 1959 Emergency. Including 47 men who came from Scotland.

He's seeking the next of kin of:

Pte George Cullen (18), from Glasgow. Served with the Highland Light Infantry. Killed in an accident on 8 June 1956.

Driver James Duncan Neil (19), from Glasgow. Served with the RAS. Died in an accident on 25 September 1956. Body returned home for burial

Sgt Alexander Stuart Sutton (39) from Kelvingrove, Glasgow. Served with the RAF. Died in an accident on 27 May 1956.