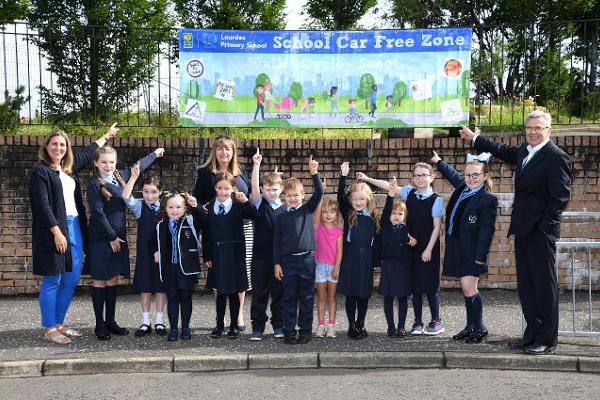 A trial of car free zones that will improve road safety at six Glasgow primary schools will begin on the first day of new school term.

The scheme will see temporary pedestrian areas created around Bankhead, Broomhill, Hillhead, Lourdes, Our Lady of the Rosary and St Blane's primary schools for limited periods in the morning and afternoon to help ensure pupils can arrive and leave school safely.

Anyone driving within the temporary pedestrian zone will be at risk of enforcement action and a £50 fine.

The push for the pilot programme follows a series of concerns such as poor and risky driving outside schools, obstructive parking that forces pupils on to the road as well as the issues created by congestion and harmful emissions.  The introduction of the programme follows extensive consultation with the schools, local communities and stakeholders and will run for approximately 18 months.

The schools chosen for the pilot have a history of complaints and concerns from parent councils, community council and elected members about pupil safety on the school run.  But there is evidence that the schools earmarked for involvement in the scheme experience high levels of car use for the school journey and also have to deal with acute congestion at the school gates.

The eligibility for involvement in the scheme also considered the school's location on the road network - the school entrance shouldn't open on to a bus route for instance. But also that there should be reasonable scope for the surrounding area to cope with displaced traffic.

Councillor Chris Cunningham, City Convenor for Education, Skills and Early Years, said calls from the affected communities for a safer environment outside schools have driven forward the plans for school car free zones.

Councillor Cunningham said: "There is a public demand from parents and residents to make sure children are as safe as possible when heading to and from school.  A number of initiatives have already tried to clamp down on poor driver behaviour, but problems that put children at risk still persist.

"In the circumstances we have to go one step further to protect our children.  Car free zones outside schools can create safe spaces for young people at key points of the school day.  The zones are being introduced on a trial basis and we will be looking very carefully at the evidence to see how effective they prove to be."

Councillor Anna Richardson, City Convenor for Sustainability and Carbon Reduction, backs the pilot programme and hopes it will encourage more pupils to take an active travel option to get to school.

Councillor Richardson said: "We must ensure our young people are as active as possible as a way to tackle the ever increasing problem of childhood obesity. Creating a safer, more pleasant environment for children to walk and cycle to school can absolutely play a part in promoting a healthier lifestyle for young people.

"Unfortunately, Glasgow currently has the highest rate of pupils being driven to school compared to the other cities in Scotland.  This amount of traffic heading to the school clearly impacts on the wider environment and creates road safety risks at the school gate. School car free zones will keep streets around schools clear of cars at the busiest times of the school day. We hope school car free zones will give parents greater confidence that their children can walk or cycle to school safely every day."

The roads around schools which are proposed to become temporary car free zones are:

The local authority with the highest rate for journeys by car was Inverclyde at 30.1% with Shetland and East Renfrewshire also on 30%.
Of the major cities, Glasgow also has the lowest rate of children walking to school. In Glasgow 45.7% of children walk to school while in Aberdeen the figure is 49.5%, Dundee 47.1% and Edinburgh 51.9%.