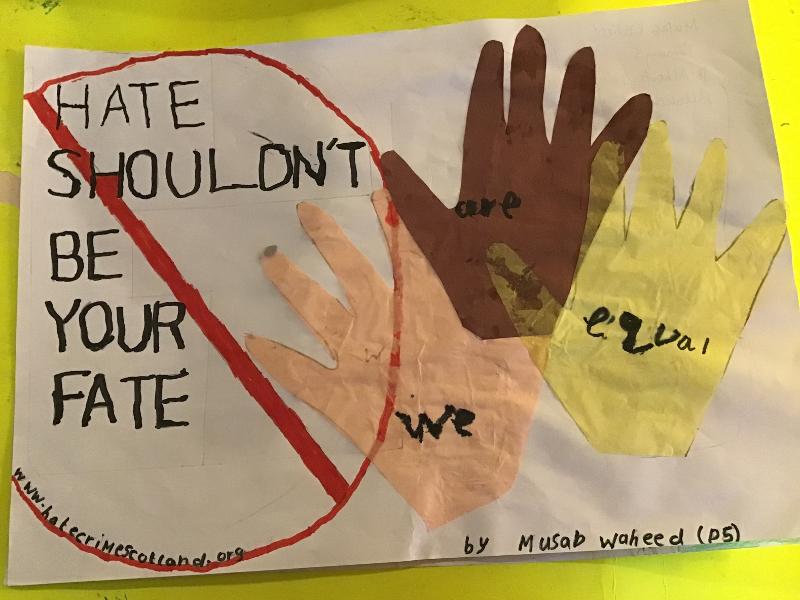 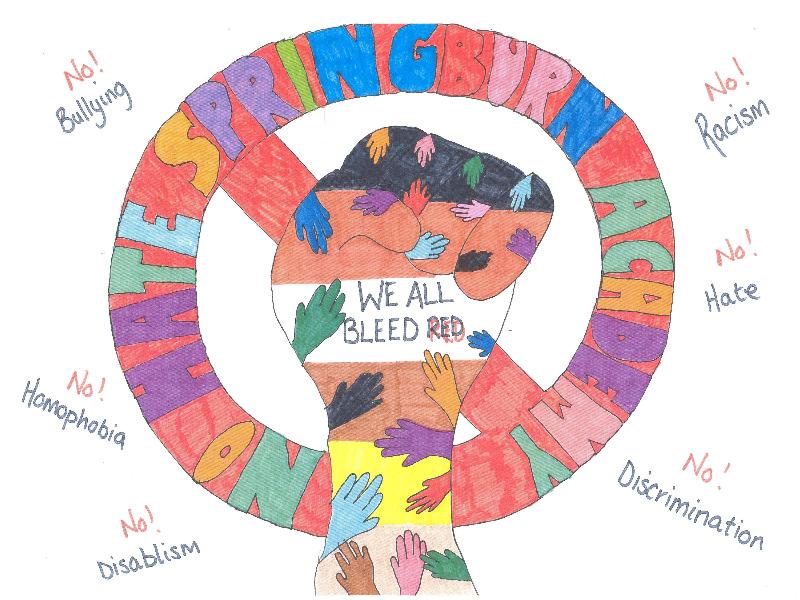 St Albert's Primary and Springburn Academy were picked from hundreds of entries received from schools across the city.

The competition was introduced this year as part of the city's annual Hate Crime Awareness Week (HCAW) which starts today (7-13 October).

Young people were asked to submit entries representing what hate crime means to them.

Musab said: "We couldn't believe it when we got told our school won the primary award and I was even more surprised to find out it was my drawing the judges picked as the winner. I'm really, really pleased."

It was a team effort from the young people at Springburn Academy.

Linda Hamilton, Headteacher at Springburn Academy, said: "Celebrating and understanding equality is at the heart of our school ethos. The young people really enjoyed working on this project. It's a challenging topic and the final submission is a team effort. I'm absolutely delighted for everyone involved."

St Albert's PS and Springburn Academy will each receive a £250 prize.  Their winning artwork, alongside a selection of entries, will be on display in the main reception area of the City Chambers throughout HCAW week.

"We had such a good response from schools and the level of creativity shown in the entries was very impressive - it was not easy picking the two winners. I'm delighted the public, and visitors, to the City Chambers during Hate Crime Awareness Week will have the opportunity to see the selection of entries on display."

Glasgow was the first city in Scotland to mark HCAW.

Now in its fifth year, the weeklong event aims to encourage the public - victims and witnesses - to speak out and report hate crime incidents.

A hate crime is any crime motivated by prejudice or hate against a person because of their race, religion, sexual orientation, disability or transgender identity.

There are a number of ways people can report a hate crime without having to go to a police station.

Glasgow has more than 60 Third Party Reporting Centres - these include Housing Associations, Victim Support, Glasgow Disability Alliance, LGBT Youth Scotland and other organisations - where staff have been trained by Police Scotland to provide help and support to victims.

Bailie Marie Garrity, Chair of the Glasgow Hate Crime Working Group, said: "We all have a responsibility to stand up against Hate Crime and support the people affected. Those who commit hate crimes do so to intimidate others and instil fear.

"Hate Crime will not be tolerated in Glasgow.  A huge amount of work goes on year-round to tackle unacceptable behaviour and support victims and the aim of Hate Crime Awareness Week is to encourage the public to come forward and speak out."

Cllr Jen Layden, City Convener for Community Empowerment, Human Rights and Equalities, is calling on the people of Glasgow to play their part and help put an end to Hate Crime.

Cllr Layden said: "No one should have to put up with this kind of abuse. It can have prolonged and devastating effects which is why it is so important for anyone who is or has been the victim of Hate Crime to report it - either directly to Police Scotland or at one of our Third Party Reporting Centres. By speaking out about Hate Crime we can show the perpetrators that it has no place in Glasgow or elsewhere.

"You can also report it online at www.hatecrimescotland.org."

Glasgow's Hate Crime Awareness Week runs from Monday 7 October - Sunday 13 October and is supported by radio adverts and advertising on the Glasgow Subway.

A selection of school entries are on display in the City Chambers until Sunday, 13 October.