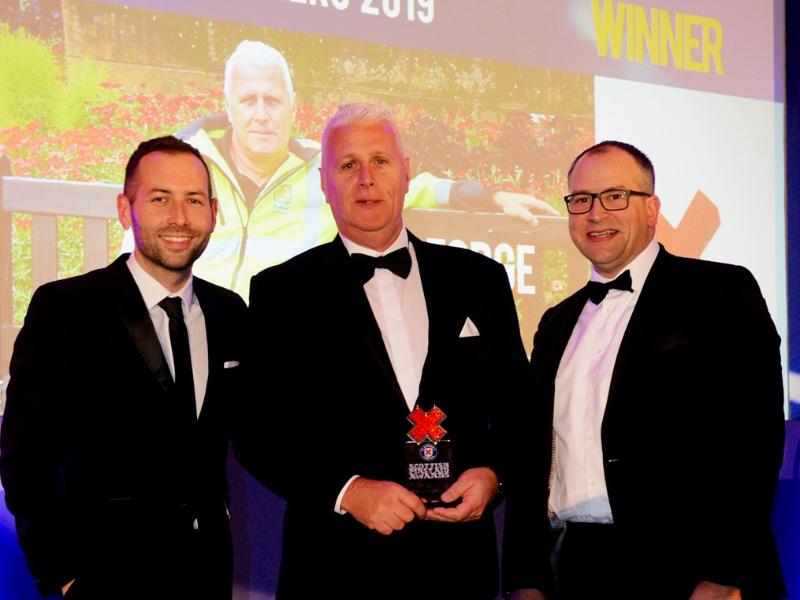 A Glasgow City Council employee has been named First Aid Hero of the Year at the prestigious Scottish First Aid Awards.

George Duff, a Roads Operations team supervisor in the Neighbourhood and Sustainability department, was on shift when he was approached by a member of the public concerned about a man on a bridge.

Without hesitating, George headed over and found a man on the wrong side of the barrier. Using the mental health first aid skills he had learned during a recent SafeTALK training session at work, George started to speak to the man and spent nearly half an hour talking to him to build a connection and encourage him to climb back over the railings.

The man had agreed to do so when the police turned up and he panicked. George explained to the officers that he had managed to establish a rapport with the man and asked to continue talking to him. After a while, George got the man to climb back to safety and took him for a cup of tea before he was taken to hospital.

Stuart Callison, chief executive of St Andrew's First Aid, said: "George's actions undoubtedly resulted in him saving a life that day and he should feel very proud of what he did.

"Mental ill health affects many people and being able to recognise the signs and intervene can go a long way in making a real difference. Often a difference between life and death. He is a truly deserving winner and we are delighted to be able to present him with this award."

Over 400 people attended the St Andrew's First Aid Scottish First Aid Awards which were held at the Doubletree by Hilton on Cambridge Street in Glasgow and hosted by David Farrell of the BBC. More nominations than ever before were received (58), recognising first aid heroes across 10 categories.