Wednesday 16 December 2020 saw the marking of a piece of Sighthill's history with the burial of two time capsules at the Sighthill Circle, the stone circle in the area. 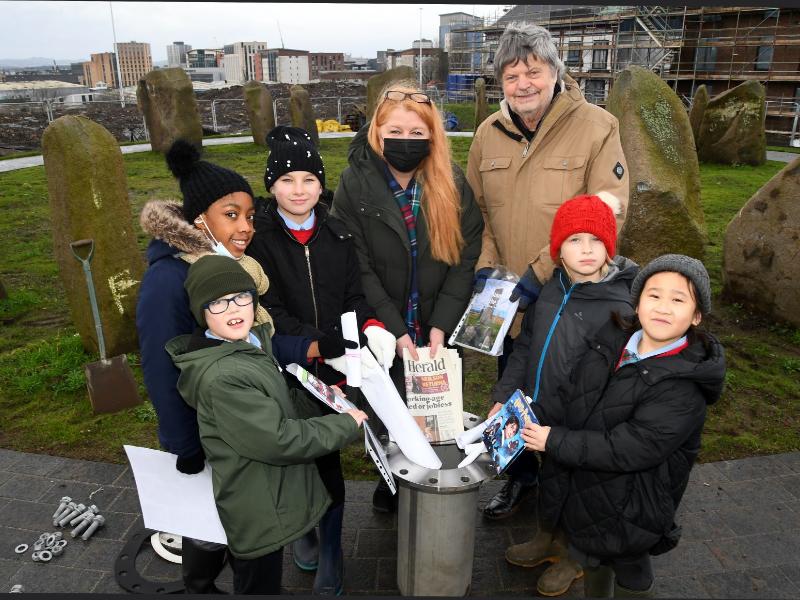 The Sighthill Circle - now moved to a more prominent site as part of the £250million regeneration of the area - had seen a time capsule buried at its original location when first erected in 1979.

The new time capsule was laid alongside another one containing the contents of the 1979 capsule, with both containing paintings, books and other objects from local schools, as well as newspaper and magazine articles and objects from the respective eras.

In attendance at the ceremony were Baillie Jacqueline McLaren, Chair of the Sighthill Local Delivery Group; Duncan Lunan, science writer and manager of the original Sighthill Circle project; and children from the Sighthill Community Schools Campus.

Bailie Jacqueline McLaren, Chair of the Sighthill Local Delivery Group, said: "The burial of this new time capsule marks another connection between Sighthill's past and the present regeneration, so it's fitting that local schoolchildren - the future of Sighthill - will be adding their own content. It was important that some of the children from the Sighthill Community Schools Campus got the opportunity to see the new time capsule being buried, creating a memory and allowing them to tell the story of a unique part of their history."

Duncan Lunan, science writer and Manager of the original Glasgow Parks Department Astronomy Project, said: "The time capsule is a message to the present as well as the future.   It tells what we know about such structures in the ancient past, about astronomy and about Sighthill in the present day, and it reminds us that if it lasts as well as the ancient sites have, the circle will still be here in thousands of years from now.   Its reburial comes at a significant moment, when the last of the circle's dedicatees, Dr. Euan MacKie, has just passed away."

The regeneration of Sighthill is the biggest project of its kind in the UK outside of London, and in the coming years, the area will be transformed to create a community with:

· almost 1000 new high-quality homes for sale and rent (141 GHA homes are already built and occupied) for the existing community and new residents;

· a new community school campus with sports facilities, which opened in late 2019;

· a new cyclist and pedestrian bridge across the M8, creating a 'street in the sky' to connect Sighthill with the nearby city centre;

· a new road bridge across the railway line to link the communities of Sighthill and Port Dundas; and

The regeneration of Sighthill - the Sighthill Transformational Regeneration Area (TRA) - is being delivered by Transforming Communities: Glasgow, a partnership between Glasgow City Council, Glasgow Housing Association, the Scottish Government; and is part-funded through the Glasgow City Region City Deal.