Glasgow Must Make Most of Waste to Tackle Climate Change 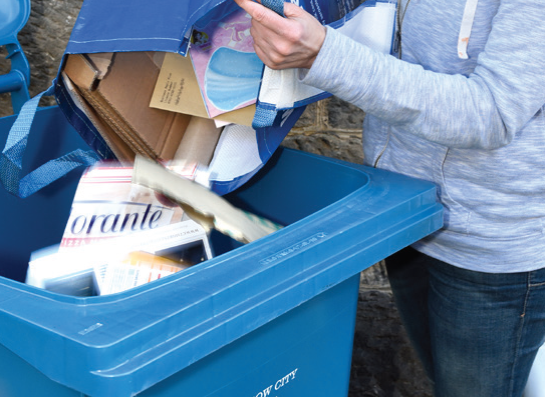 Glasgow needs to make the most of its waste if the city is to challenge climate change.

That's the core message of a new strategy on how Glasgow deals with hundreds of thousands of tonnes of waste produced by city households each year.

According to the council's Resources and Recycling Strategy 2020-30, the 255,000 tonnes of rubbish thrown by residents in 2019 equated to over 774,000 tonnes of carbon dioxide emissions, which are created during the extraction, manufacturing and disposal of materials consumed in the city.  While each Glaswegian produces less waste than the national individual average, this still leads to a greater carbon output per person than people across the rest of the country due to the low overall rate of recycling in the city.

Less than 25% of the household waste was recycled in 2019, the same year the council declared a climate emergency and set about developing a plan for the city to become carbon neutral by 2030. In support of efforts to tackle the climate emergency, the Resources and Recycling Strategy sets out the ambition for Glasgow to become a zero waste city, which means minimising the production of waste but also treating waste as a valuable resource that shouldn't just be thrown away.

Focused on changing Glasgow's relationship with waste, the strategy is built upon the basic principles of waste management - prevention, preparing for reuse, recycling, other recovery such as creating energy from waste and, as a last resort, disposal. It also aims to increase recycling rates of the most carbon-intensive waste streams such as food, textiles and plastic while also improving the overall quality and quantity of materials collected for recycling. The continued reduction of the amount of waste sent to landfill is also a key objective.

The 49 actions contained within the strategy will cover a range of local and national policies, improvements to infrastructure, use of innovative technology where ever possible and also seek to maximise the effectiveness of the services provided by the council.

Councillor Anna Richardson, City Convener for Sustainability and Carbon Reduction, believes that how Glasgow deals with its waste is integral to creating a truly sustainable city.

Councillor Richardson said: "Our ambition for Glasgow to become one of Europe's most sustainable cities must go hand-in-hand with how we approach waste and resources. As a city we are far too quick to see waste as problem to be discarded rather than a valuable resource that can reused or recycled.

"Seeking to throw rubbish away comes at a cost that has a significant financial and environmental impact. It costs the tax payer substantial sums to get rid of rubbish in landfill and the less we recycle, the more expensive that rubbish becomes. But more importantly the carbon footprint of waste can be enormous, especially when we don't make the most of the resources we seek to throw away.

"The clear link between household waste and carbon emission means we must begin to think differently about waste if we are to face the climate emergency. The council has a vital role to play in achieving this and we will do everything we can to reduce waste, but also support re-use and recycling options. Culture change can be hard, but if everyone in Glasgow takes greater responsibility for their own waste then we can build a cleaner, more sustainable future for our city."

The council has already been putting in place a series of measures aimed at increasing recycling and improving waste management in general. This includes the opening of the Glasgow Recycling and Renewable Energy Centre, a £6.5m investment in a programme to replace 50,000 old-fashioned, low capacity steel bins with new wheelie bins and signing up to the Scotland's Household Recycling Charter.

It is intended the Resources and Recycling Strategy will built on this work but also support other plans such as the city's plastic reduction strategy and the circular economy route map. Specific actions within the Resources and Recycling Strategy include developing a new policy that covers the contamination of recycling bins with other types of waste, and a review of how the city's waste centres operate and ensuring collection services meet the expectations of the Household Recycling Charter, among others.

The impact of national changes such as the Deposit Return Scheme for drinks cans and bottles and Extended Producer Responsibility for Packing Waste will also be monitored.

The figure of 774,090 tonnes of CO2 emissions from Glasgow's household waste is based upon Zero Waste Scotland's carbon metric process.

Each Glasgow resident produces on average 0.4 tonnes of household waste each year against a national average of 0.44 tonnes per person. While 0.2 tonnes of an individual Glaswegian's household waste goes to landfill, the national average is 0.14 tonnes. The carbon impact from waste of the average Glasgow resident is 1.18 tonnes with the Scottish average 1.04 tonnes per person.

Glasgow City Council manages over 300,000 tonnes of waste from household and commercial sources each year.

After being tabled at the Environment, Carbon Reduction and Sustainability Committee, the Resources and Recycling Strategy 2020-30 will now be presented to the City Administration Committee for approval.

More information on the Resources and Recycling Strategy 2020-2030 can be found via this link.