New On-Street Storage Shelters To Break Down Barriers To Cycling 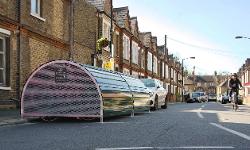 New on-street cycle storage shelters are set to be introduced to neighbourhoods across Glasgow to support the growth of cycling in the city.

With around 70% Glasgow's homes in flat or tenements, finding safe spaces for cyclists to park their bike can be a real challenge when communal property rules often prevent storage on stairwells.  Even then, having to carry bikes up and down flights of stairs can act as a deterrent to people cycling regularly.

But it is hoped the introduction of 60 storage shelters on streets throughout Glasgow will make cycling a more attractive travel option that residents rely upon more routinely. Initially introduced as a pilot programme in conjunction with cycle storage and infrastructure designers Cyclehoop, the Bikehangar shelter accommodates six bicycles and spaces are  available to hire for £6 per month.

Cyclehoop successfully operates similar schemes in other major UK cities and if that success is repeated in Glasgow, then it is anticipated that further storage shelters will be installed on city streets in due course.

Councillor Anna Richardson, City Convener for Sustainability and Carbon Reduction, backed the scheme as a way to build greater reliance on more sustainable forms of transport as part of the effort to tackle the climate emergency.

Councillor Anna Richardson said: "With so many of us in Glasgow living in tenements or flats, bike storage is a real issue for people who cycle or who are keen to take up cycling.  Keeping bikes in stairwells can cause obstructions, which creates a safety risk and can put owners at odds with other residents. Bikes kept on stairwells are also at a greater risk of theft.

"But having access to secure storage that's easy to use will take away a significant barrier that deters people from relying on a bike. Our new scheme with Cyclehoop will make using a bike more attractive and ensure how we get about Glasgow is more active and sustainable. Encouraging greater reliance on the bike as an ordinary mode of transport is a vital part of our efforts to decarbonise the city's transport system."

Residents can visit the Cyclehoop Rentals website www.cyclehoop.rentals to view available locations and apply for a space now. Installation of the cycle storage will commence on Monday 24 May and is expected to complete in July. Cyclehoop have partnered with Scottish cycling charity Bike For Good to carryout maintenance of the units.

Cyclehoop Founder and Design Director, architect Anthony Lau said: "Making cycle storage accessible is key to enabling people to cycle their shorter journeys. We designed the Bikehangar to allow those who cannot keep their bicycles at home, to store them on safely and conveniently on their street, protected from the weather."

If this trial is successful the council will look extend the use of on-street storage into other parts of the city where ever possible. Residents can suggest potential locations for storage on the Cyclehoop website and all information collected by Cyclehoop will be passed back to the council for further consideration.