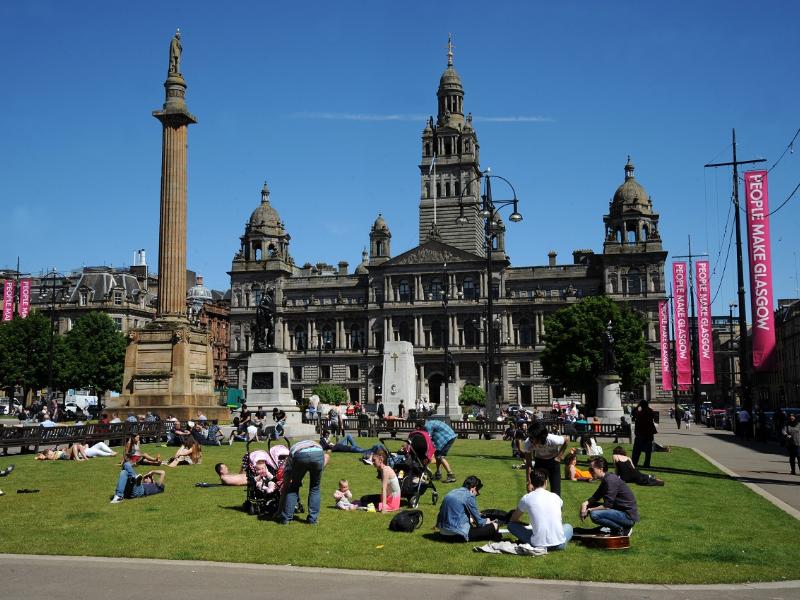 First laid out in 1781, named after King George III and developed in earnest 20 years later, George Square is Glasgow's principal civic, ceremonial and cultural space, featuring several of the city's best-known landmark buildings.  On its east side is the Beaux-Arts style City Chambers (1889) - headquarters to Glasgow City Council since 1996 - designed by William Young.

On the corner of the square with West George Street, the Merchant's House (1874/1909), designed by John Burnet and extended upwards by his son JJ Burnet, is crowned with a dome bearing a ship symbolising Glasgow's historic role as one of the great global trading cities. At the heart of George Square, a tall Doric column (1837) bears a statue by John Greenshields of the renowned Scottish Romantic era novelist and poet, Sir Walter Scott.

John McAslan + Partners' have been commissioned to reconsider the synergy and balance between George Square and the surrounding streets in relation to contemporary life. This involves clarifying the architectural and spatial qualities of the Square and its relationship to the surrounding urban context. The scope of the improvements will include George Street and St Vincent Street as well as John street and Dundas Street.

The scheme is part of the wider £115m Avenues initiative aimed at improving pedestrian connectivity and priority throughout the city, amid new tree planting, rain gardens, cycleways and improved public transport.  Sustainability and community are at the heart of the brief with the aim of substantially enhancing the urban environment and opportunities for residents and visitors.

Councillor Susan Aitken, Leader of Glasgow City Council, said: "The redesign of George Square and the creation of Avenues and other new public realm on neighbouring streets is a crucial part of the regeneration of the city centre. It is so important as not only will the redesign play a crucial role in the transformation of what is undoubtedly Glasgow's foremost civic space, but it is also a symbol of our vision for the city centre - a place that will be far more attractive to Glaswegians and our visitors, and somewhere that illustrates the economic, environmental and social gains to be made from this project."

Andy Harris, Leader of John McAslan + Partners' Landscape Team said: "Located precisely at the point where the original Georgian urban grid meets its Victorian extension, George Square has for centuries been a natural centre of gravity for Glaswegians who come to celebrate, play, relax, meet and when necessary protest.  We are thrilled to help deliver the next phase of its evolution as Glasgow's most important civic space."

Economy Secretary Kate Forbes said: "It's great to see further progress in delivering the Avenues Programme, with the appointment of John McAslan + Partners as architects tasked with developing George Square and the surrounding area to the benefit of residents and visitors alike. The Scottish Government is a full partner in the Glasgow City Region City Deal, contributing £500 million over 20 years. Investment in the City Region Deal will contribute to the region's economic recovery by creating jobs, and providing the commercial infrastructure to support and attract businesses to Glasgow and the surrounding area. The Avenues project also encourages active travel by supporting walking and cycling infrastructure in the area."

UK Government Minister for Scotland, Iain Stewart, said: "George Square is one of Glasgow's most iconic civic spaces, embodying the city's grandeur, heritage and cultural vibrancy. I look forward to seeing John McAslan + Partners plans for improving and preserving the square and its surrounding streets for everyone to enjoy. The UK Government is investing more than £1.5 billion into city region and growth deals across Scotland, helping communities everywhere to build back better from the pandemic."

The Department of Architecture at the University of Strathclyde and the Mackintosh School of Architecture at The Glasgow School of Art are collaborating with John McAslan + Partners through a range of socially and environmentally-led educational initiatives that will embed both students and staff in the design process.

Founded by Glasgow-born John McAslan in 1993, John McAslan + Partners has considerable experience in working in Scotland.  The practice's current Scottish projects include the refurbishment of the Burrell Renaissance in Glasgow and the National Galleries of Scotland's new Collection Facility in Edinburgh.

More information on the Avenues programme - the biggest of its kind in the UK - is available at: https://www.glasgow.gov.uk/avenues. The Avenues will be a network of new, attractive, accessible, safe, sustainable and easily-maintained routes throughout the city centre that are people-focused, encourage active travel and are more attractive to residents, workers, visitors and investors.