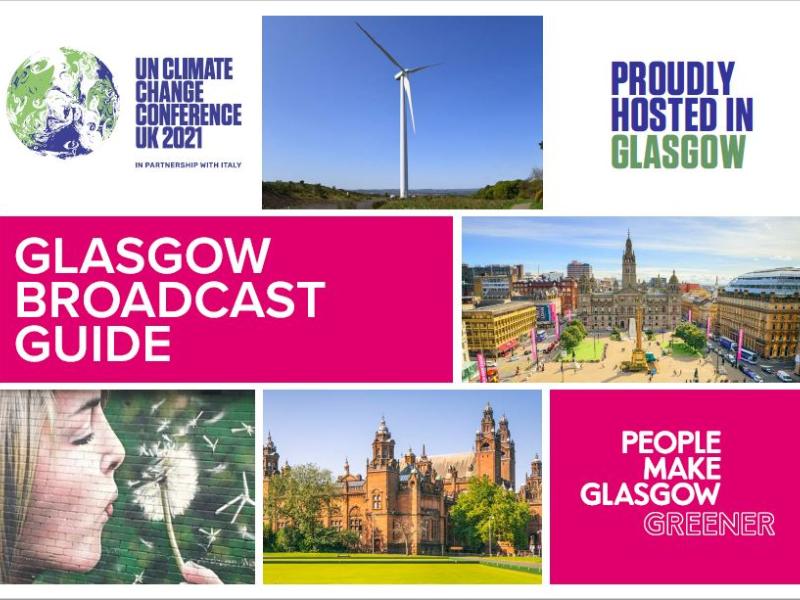 Glasgow City Council's COP26 team has produced a series of bespoke media resources to assist press and broadcasters in planning their coverage of the UK's hosting of the 26th UN Climate Change Conference of the Parties (COP26) in Glasgow at the SEC from 31 October -12 November 2021.

As well as a welcome video and anchor feature by Councillor Susan Aitken, the Leader of Glasgow City Council, the digital media kit also contains a suite of six features across Live, Invest, Meet, Visit, Experience (major events and festivals) and Study themes with sustainability as the green thread connecting them together.

30 Green Glasgow Fast Facts meanwhile highlights the city's commitment to becoming the UK's first Net Zero carbon city by 2030 through a snapshot of key projects both in Glasgow and across the City Region.

The newly developed portal www.PeopleMakeGlasgowGreener.com/media has been designed as a one-stop shop for press and broadcasters in the run up to, and during COP26.  In addition to the digital media kit, the portal also provides links to multi-media assets of Glasgow, Scotland and the wider UK including high-res images and b-roll.  Links to the latest news updates from a Glasgow, UK and UN perspective also feature, as does information on filming locations and a wealth of other key information.

A COP26 edition of the Glasgow Broadcast Guide has been produced giving details of filming locations, which are available to book as stand up positions for live reporting or pre-records.  The Smart Canal project, Climate Clock projection at the Tolbooth, Glasgow Children's Woodland Project and Whitelee Wind Farm are among the locations featured and sit alongside some of the city's most iconic attractions in the 36-page, full colour PDF guide.

The Destination Media Hub (DMH) will be located at 40 John Street. G1 1JL within the COP26 Host City Zone. It will operate daily from 9am - 7pm between Thursday 28 October and Friday 12 November.

The DMH team will be on hand to assist media with destination enquiries on Glasgow and Scotland, as well as facilitate the booking of official city camera positions.

The 'Made in Glasgow' showcase meanwhile will highlight the city's innovative approach to sustainability - particularly through circular economy principles - and also profile its creativity across art, architecture, design, film, fashion, food and drink.

Media will have access to free Wi-Fi and be able to enjoy a taste of Glasgow with complimentary refreshments from local suppliers. There is space within the DMH for one-to-one meetings or to use as a hot desk if a deadline is looming.

The DMH will also be the media pass collection point for news outlets filming at the bookable stand up locations as detailed in the Glasgow Broadcast Guide.

All necessary measures regarding security and COVID19 mitigation protocols will be in place to protect DMH staff and visitors.

Councillor Susan Aitken, Leader of Glasgow City Council, said: "We are very much looking forward to welcoming the world's press and broadcasters to Glasgow for COP26 and understand their need to access vital information on the city quickly and efficiently.

"We hope that the creation of these bespoke resources will not only assist media in their reporting from Glasgow during COP26 but also contribute to the conference's legacy by providing inspiration and story ideas for future coverage of the city's climate change ambitions as we work towards achieving our goal of being carbon neutral by 2030."

Throughout COP26, the City Chambers will be a prominent focal point to welcome the world. The COP26 Host City Zone will build on Glasgow's sustainability ambitions and act as a hub that allows the host city to engage with a wide range of partners from across the world as well as other cities and city networks.

The council is working with groups and organisations including Bloomberg, C40 city network tackling climate change, Core Cities UK, Stop Climate Chaos Scotland, faith and third sector groups to work up a programme of policy meetings, receptions and events that will complement the main COP26 programme.

This activity will not only be an important legacy opportunity for Glasgow but it will also help reinforce the city's position as a world leader in the race to net zero and a place where green business can be done. More information on the host city zone and use of GCC owned venues can be found at www.glasgow.gov.uk/cop26

Details of all the bespoke media resources can be found at: www.PeopleMakeGlasgowGreener.com/media