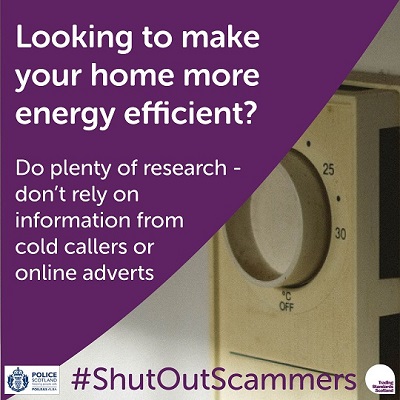 Glasgow residents are being warned to beware of scammers trying to take advantage of people worried about the rising cost of living.

The city council's Trading Standards team is holding information events at city DIY stores to alert people to the dangers of doorstep scammers promising to make homes more energy efficient or to carry out "urgent" repairs.

Trading Standards staff are also joining forces with Police Scotland to carry out spot checks in Glasgow communities to ensure people who are having work done have been offered cooling off periods, have signed contracts and are happy with the work being undertaken.

The action aims to raise awareness of the mis-selling of energy efficiency measures, doorstep crime and rogue trading scams as well as encouraging people to report doorstep crime.

It follows the targeting of a retired teacher in nearby Paisley who was visited by a cold caller offering free loft inspections. The woman was told that there was toxic mould and damp in her attic and she should install insulation at a cost of £7000. Worried that the mould was dangerous, she agreed to take out a loan to cover the cost of the insulation. The scammers helped her find and apply for a loan online.

Luckily, when she tried to transfer the money, her bank flagged the transaction as a potential scam and contacted the police. Officers were able to have the loan cancelled and ensure the woman would not be contacted by the rogue traders again.

Her daughter later contacted Home Energy Scotland and had an impartial inspection of the loft carried out - they found that, although there was mould, it wasn't toxic. They advised that vents costing only £200 could solve the problem and even if the woman had needed extra insulation, it should only have cost between £2000-£4000.

Gary Walker, Glasgow City Council's Head of Community Safety and Regulatory Services, said: "Conmen and rogue traders know that people are worried about energy bills at the moment and are trying to exploit the situation by preying on people's anxieties.

"Trading Standards want to alert people to their ploys and urge them to shut out scammers. People are also asked to look out for elderly friends and relatives who might feel pressured into getting work done by cold callers.

"Anyone who is worried can go along to one of our information events for advice. The joint patrols with police in Glasgow also aim to detect and deter scammers who know that we have them in our sights."

Our Trading Standards team will be at B&Q at Parkhead Forge Retail Park on the morning of Wednesday May 18th offering information and advice on scams. Details of other information events will be release when confirmed.

A COSLA spokesperson said: "We urge consumers not to deal with cold callers and to seek local traders who have been vetted by Trading Standards and who have made a commitment to treat customers fairly via approved trader schemes. Do plenty of research into companies before agreeing to any work being undertaken, remembering that online adverts can be misleading and that reviews can be faked. It is advisable to check at least three different review sites and to get more than one quote for a piece of work."

Detective Superintendent Dave Ferry, Depute Chair of Police Scotland Acquisitive Crime Tactical Board, said: "Typically, doorstep criminals look to fraudulently represent tradespeople so that they can gain access to your home where they look to steal items of value which can include your personal information that they can then use for financial gain.

"The Shut out Scammers campaign aims to bring these scams to the public attention so that communities are informed and feel empowered to question cold-callers and turn away anyone whose identity they do not feel is genuine."