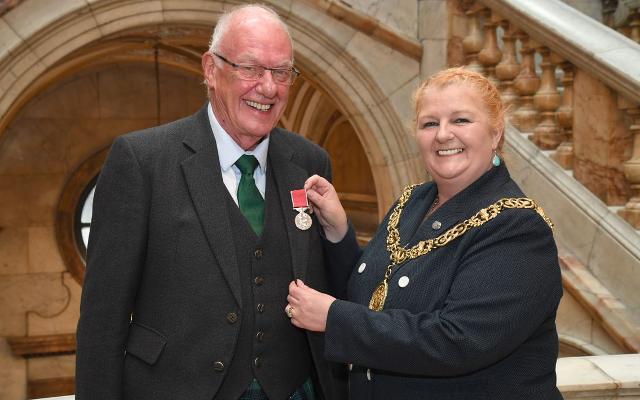 A former NHS Chief Executive was presented with a British Empire Medal by Glasgow's Lord Lieutenant for services to Gaelic choral music on Wednesday 22 June 2022.

Kenneth Thomson (72) from Campbeltown was awarded the honour, on behalf of Her Majesty the Queen, by Lord Provost Jacqueline McLaren - in her role as Lord Lieutenant - at the City Chambers.

Kenneth said: "This is wonderful. I received an email out of the blue and one of the most difficult things I had to do was keep schtum. This is just for  doing something I really love doing. I fell into it really. It was pure chance. I'd just gone along to help the choir out at the Mod. I started off singing and then became musical conductor - without a musical  qualification to my name."

The Lord Lieutenant said: "Kenneth's commitment as volunteer conductor of the Glasgow Gaelic Musical Association has deservingly been recognised. It's one of Scotland's oldest Gaelic Choirs and Kenneth's passion and musical talent has sealed its reputation as a world-class. It's a double celebration really because I've heard, his granddaughter Anna, who's here today, has just been appointed Head Girl at St Columba's, Kilmacolm.''

The choir's musical highlights include lifting the coveted Lovat and Tullibardine Trophy at the Royal National Mod, performing at Proms in the Park with the Scottish Symphony Orchestra and helping launch dedicated Gaelic language television channel - BBC Alba - with the choir's recording of 'Canan Nan Gaidheal' .

Kenneth's gift for music was evident from a young age, winning the Silver Pendant in the 1970's for his solo at the East Kilbride Mod and going on to  seize Gold in Stornoway.

He explained: "My primary school headteacher taught me my first Gaelic song for a school competition. I won. I was around eight years old and that was the start of my journey."

Kenneth's enthusiasm for the Royal National Mod has seen him coaching several Mod Gold medallists as well as recording three albums.  The most recent, Sighe An Airgid (The Silver Way) to mark his 25th anniversary with them.

An anniversary that also saw  the publication of Kenneth's book containing more than 20  of his Gaelic song arrangements and a BBC Alba documentary focusing on his choral work. His contribution to the choir also saw him inducted into the Scottish Traditional Music Hall of Fame.

A former Chief Executive of Yorkhill NHS Trust and Law Hospital NHS Trust, Kenneth organised many charity concerts to fund raise for health-related projects - including the charities Music in Hospitals and Young Lives versus Cancer.