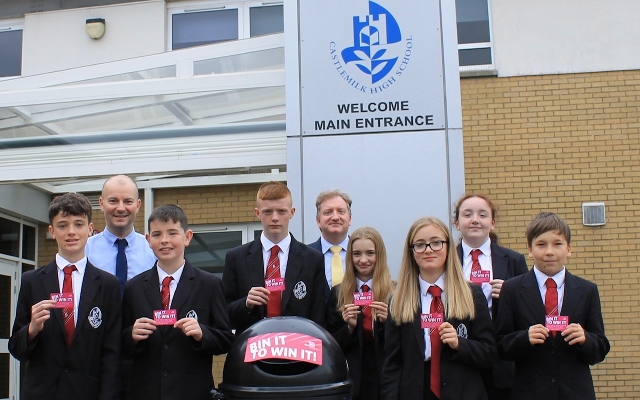 Pupils at Castlemilk High School have mapped bin locations, carried out litter audits and held clean ups to reduce litter on a busy route by up to 80%.

First year pupils at the school teamed up with Glasgow City Council's Clean Glasgow team for a pilot project which has drastically reduced litter on the route between the school and local shops.

Gary Rushworth, the school's Faculty Head of Science, worked with a class of first years to map the location and number of bins on the route pupils take to local shops at lunchtime. Their research revealed that several of the bins were on the opposite side of the road from the path which was used most frequently. As a result of their data, the council installed a new 360 litre bin on the other side of Dunagoil Road half-way between the shops and a local takeaway van.

Working with Clean Glasgow, pupils also carried out around five community clean ups over several months and audited the type and quantity of litter found on different occasions. Plastic bottles, cans and takeaway wrappers were among the most commonly collected items. Excitingly, the litter audits show that between February and April this year the number of cans found on the route fell by 80%, the number of plastic bottles fell by 62% and the number of sweet wrappers fell by 59%.

During the council pilot, officers sprayed footsteps on paths leading to bins - a practice called "the nudge technique" which was successfully pioneered in Amsterdam - to encourage everyone in the community to dispose of their litter responsibly. The council also ran a Bin It to Win It pilot with the school - offering prizes like reusable water bottles and McDonald's vouchers to pupils who were seen actively using the bins during random spot checks by the campus cop, teachers and the Clean Glasgow team.

Bin It To Win It was launched to combat concerns about litter in the area and has attracted favourable feedback from local residents who have noticed improvements.

Mr Rushworth said: "The Bin It to Win It pilot project has helped make Castlemilk High School and its surrounding areas cleaner. We are proud of our environment and community, and have received a lot of positive comments from local residents. We are delighted to be part of the campaign. The pupils have really enjoyed it and we've further reduced our environmental impact by increasing the amount we recycle in school. We intend to continue with Bin It to Win It next term."

He said: "It's great to hear of young people supporting the Clean Glasgow campaign by taking action on several fronts to improve their neighbourhood as part of our Bin It To Win It pilot. Glasgow is a great city and we all have a role to play in keeping it clean. The results of the pilot are very encouraging with a huge reduction in litter.

"The pilot has not only been educational and empowering for the pupils, it has also had a positive impact on the community. It's great to hear that the pupils are keen to continue with it going forward and I'm also looking forward to seeing it introduced in more schools across the city."