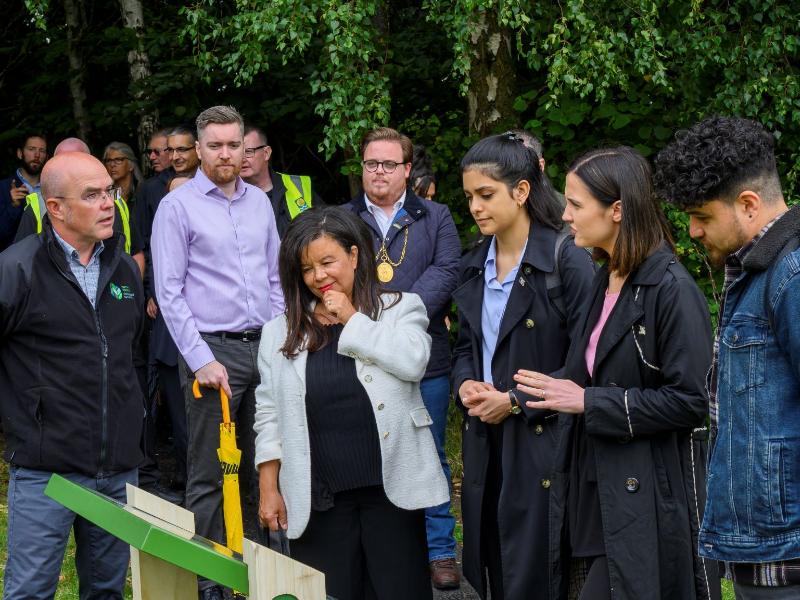 A new living memorial at Pollok Country Park pays tribute to the sacrifice of foresters from the Commonwealth countries who travelled thousands of miles to keep Scotland's timber supplies flowing during WW2.

The Commonwealth Foresters' Memorial has been sensitively landscaped into the park. It features 100 trees planted in widening circles, similar to the growth rings of a tree. It celebrates the work and heroic sacrifices foresters from the Commonwealth countries during the war.

Planting the last tree in the memorial, Environment Minister Mairi McAllan said: "In 1941, thousands of foresters from Belize, Australia, Poland, New Zealand and Canada answered the call for assistance and came to work in Scotland's forests. They replaced many of our own foresters who were abroad fighting in the war.

"It is important that we remember their commitment and selfless service. We owe each and every one of them a debt of gratitude and the Scottish Government would like to thank them and their contribution during WW2."

During WW2, timber was in great demand for a range of uses including pit props in the coal mining industry, which in turn produced the fuel for large scale manufacturing in the war. As many supply routes overseas were blocked during the war, it was vital that home grown timber supplies were kept open. It was the job of foresters from other Commonwealth countries to keep timber flowing.

Remarkably, 900 foresters from Belize (formerly British Honduras) sailed a perilous 5,000 miles across the North Atlantic to Scotland, dodging German U boats along the way.

One such man who rallied to the UK's call for help was Sam Martinez. At the age of 32, Mr Martinez travelled from Belize in 1942 to work in the forests of Scotland.

He worked in the Highlands with others from his homeland until the British Honduran Forestry Unit was disbanded in 1943.

Mr Martinez decided to stay in Scotland and had six children with his Scottish partner Mary Gray. He saw the rest of his years living in Edinburgh until the age of 106. His grandson, Yutsil Hoyo Diaz Martinez, lived with him for the last five years of his life.

Attending the official opening of the memorial, with his mother Carol Martinez, he said he was immensely proud of his grandfather .

He commented:  "I'm so pleased that the Scottish Government and Glasgow City Council are recognising this important piece of Scottish history.

"It's a fantastic story that not that many people are aware of. It's so important that we look back and remember all those who served with pride during the war. I know that 'gramps' would be really chuffed that his story is being told."

Visitors to the memorial can walk through the trees and read information panels explaining the history of the then Forestry Commission and how it changed over the years.

Councillor Ruairi Kelly, Glasgow's City Convener for Neighbourhood Services and Assets, said: "We are honoured to have this important memorial in the heart of Pollok Country Park.

"The city council is delighted to work with organisations and individuals who are keen to get involved with planting trees across Glasgow in support of our Climate Plan, and it is fitting to recognise the significant contribution those arriving from across the Commonwealth have made to Scotland's forests.

"Accessibility to all our parks is important and especially to a memorial like this, so visitors can alight our electric shuttle bus service which links Pollok Country Park, the Burrell Collection and Pollok House, to Pollokshaws West train station at the Burrell Collection bus stop. The memorial is a short five minute walk from the bus stop on tarmac surfaces."

Attending the opening, Scott Williamson, the New Zealand Honorary Consul for Scotland, highlighted that his country was very proud of those who helped in WW2. He said:

"During the Second World War,  the New Zealand Prime Minister, Peter Fraser (originally from Ross-shire in Scotland), made visits to New Zealanders serving the war effort in many different ways and in many parts of the world.

"On a visit to the UK in 1941 he visited New Zealand Army Foresters and was even seen sawing logs at their logging camp."