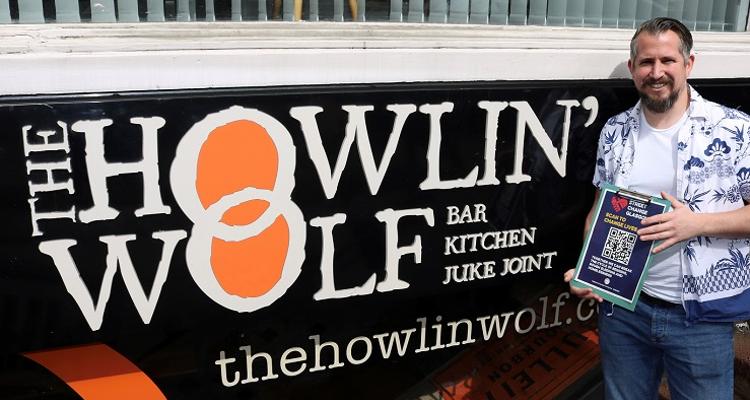 Nineteen venues have agreed to display new QR codes which will enable people to donate to Street Change Glasgow by scanning them with their mobile phones.

The new QR codes have begun popping up in Best Bar None venues around the city this week. Money donated via them will go to Street Change Glasgow which is managed by Simon Community Scotland to help people involved in begging improve their lives.

The city's alternative giving scheme has already raised more than £12,500 via cashless donation points since it was launched by partners including Glasgow City Council and Glasgow's Health & Social Care Partnership in March 2020.

Previous donations were made via cashless tap points at locations including Glasgow Central Station. The QR codes will replace those as a new, easy and convenient way to donate to the alternative giving scheme for vulnerable people.

Oliver McLean, General Manager of Howlin Wolf in Bath Street explained why he was keen to display Street Change Glasgow QR codes in the venue.

He said: "When I heard about the alternative giving scheme it really resonated with me. I think it will help humanise people involved in begging for the general public. We're keen to help raise awareness of it to help raise money for vulnerable people. We'll be displaying QR codes in the lobby, in wall frames in the toilets and on the back of our menus so that people can donate."

Lorraine McGrath, Chief Executive, Simon Community Scotland, said: "We are extremely proud to be relaunching Street Change Glasgow, now that the world is opening up again. We are particularly excited to launch the QR code element of the campaign. We thank the venues participating in the Best Bar None scheme for partnering with us and displaying QR code posters, making it even easier for everyone to be part of making a difference.

"Donating to Street Change Glasgow directly provides life's necessities without delay for those in crisis, to help them be safe and feel valued and connect with support to move away from such a harmful and damaging existence. The cost of living crisis is driving more people to desperation and it is now more critical than ever that we reach and engage with everyone who finds themselves street begging, to simply meet their basic needs."

Councillor Allan Casey, Glasgow's Convener for Homelessness and Addictions Services, was involved in creating the begging strategy and setting up SCG along with a wide range of partners.

He said: "I'm delighted that so many Best Bar None venues have responded so positively to the new QR codes and volunteered to display them in their venues. It is great to get the codes into bars and entertainment venues and I hope that more businesses, including shops, come forward to support the alternative giving scheme in this way.

"The new QR codes are a quick and easy way to donate in the knowledge that your money will be used to improve a vulnerable person's life."