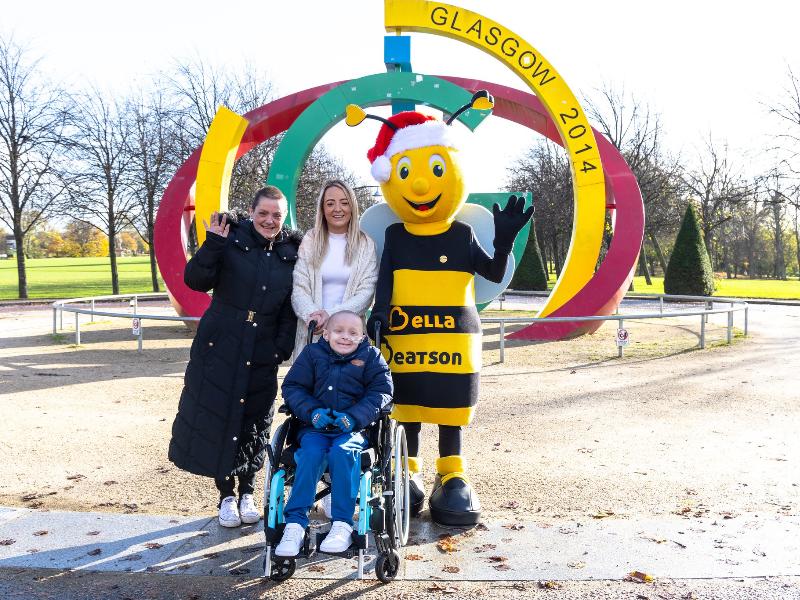 A brave six-year-old who has an aggressive brain tumour today unveiled the new T-shirt designs for Glasgow's charity Santa Dash.

Little Cole Park underwent major brain surgery and intensive courses of chemotherapy and radiotherapy after doctors discovered he had a brain tumour in March this year.

The youngster spent several months in the Beatson West of Scotland Cancer Centre with his mum, Michelle Barrie, who says the staff became like family as visiting was restricted due to Covid.

Cole, who is now continuing his treatment at home, visited Glasgow Green along with his mum and aunt to inspect the course and meet the charity's mascot Bella the Bee. The family fun run will take place for the first time in three years on Sunday December 11th with a route around Glasgow Green and reusable T-shirts for runners.

Cole of Kirkintilloch showed off one of the new T-shirts, which are more environmentally-friendly than the previous single-use Santa suits.

The T-shirts feature a belt and button design on the front and are included in the run's registration fee of £15 for adults and £5 for young people under the age of 16 years.

Cole's mum, Michelle, who shaved off her hair in sympathy with her son, said: "Lisa and I want to run the Santa Dash to raise sponsorship for Beatson Cancer Charity in recognition of everything the hospital has done for Cole. I can't praise the surgeons and staff at the Beatson highly enough. Everyone is amazing. They kept me going when I was struggling on a bad day and became like family.

"Every Friday, Cole got to drive a wee police car into his radiotherapy sessions and he loved that. And they gave me vouchers for the café while I waited for him to finish his treatment. When he was discharged from hospital, the staff threw him a wee party. He misses them all so much."

Runners who register to take part in the festive family fun run can raise sponsorship for any chosen charity. Any profits from the Glasgow City Council run event will be split between the Lord Provost's Children's Fund and Beatson Cancer Charity.

Glasgow's Lord Provost, Jacqueline McLaren, said: "The Santa Dash is such a happy uplifting event which raises funds for good causes in the run up to Christmas. Everyone, like Cole's mum, will want to raise funds for a charity which is close to their own heart. And for the first time in three years, everyone can physically get together to take part in the festive run while showing their support for charities doing amazing work.

"I'm really looking forward to the big day and encourage anyone who is interested in taking part to register as soon as possible as places are filling up fast!"

Glasgow's first Santa Dash took place in 2006 and quickly became a firm favourite in the city's events calendar. It attracted 8000 runners in 2018 and has raised more than £350,000 for various charities since it started. The pandemic prevented the live event taking place in recent years but it is now back due to popular demand!

Register and find out more about the Santa Dash at www.glasgow.gov.uk/santadash Registration closes at 4pm on Friday December 9th.