Glasgow signs up to ending HIV by 2030 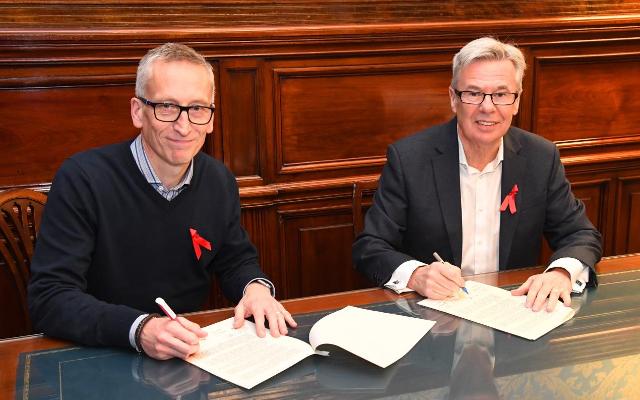 Glasgow's commitment to ending new HIV transmissions by 2030 was reaffirmed today (1 December 2022) as Councillor Chris Cunningham, Chair of Glasgow City Integration Joint Board, put pen to paper and signed the city to the 'Paris Declaration on Fast-Track Cities'.

Glasgow was the first city in Scotland to sign up to the Fast Track Cities (FTC) initiative in 2018.  The FTC is a global partnership between a network of cities with high HIV rates and the International Association of Providers of AIDS Care (IAPAC); the Joint United Nations Programme on HIV/AIDS (UNAIDS); the United Nations Human Settlements Programme (UN-Habitat) and the City of Paris.

City officials designate their city as a Fast-Track city by signing the Paris Declaration which outlines a set of commitments to achieve the initiative's objectives.

Cllr Chris Cunningham met with the CEO of Waverley Care, the charity leading on Fast-Track Cities in Scotland, to sign the Paris Declaration on behalf of the city.

He said: "Today HIV is considered a long term health condition and as easy to treat and manage as diabetes. Despite this we know that HIV still carries a considerable weight of stigma. Ensuring good provision and good uptake of HIV testing is essential to meeting the ambitions of the Paris Declaration.

"Our main challenge is therefore to ensure that those who are living with HIV and do not know it, can be tested and provided with treatment and care while continuing to provide effective prevention interventions.

"We are delighted to recommit to the Fast-track initiative and work towards meeting the new targets."

Waverly Care CEO Grant Sugden said: "I am delighted that Glasgow has re-affirmed their commitment to becoming a Fast-Track City. This commitment is a vital step towards reaching a Scotland with zero new HIV transmissions by 2030. Waverley Care are incredibly pleased to be leading on Fast-Track Cities in Scotland.

"The initiative allows us to work with the Council, NHS and other stakeholders to reach shared goals for HIV transmission elimination, and Glasgow has an important part to play in this. Glasgow has faced particular challenges in dealing with an outbreak of HIV and while this has been controlled, more work must be done on areas such as such as HIV stigma and increasing access to testing.  We hope Glasgow's recommitment will accelerate progress to reach HIV targets and eliminate HIV transmission by 2030."

José M. Zuniga, President and Chief Executive Officer of International Association of Providers of AIDS Care, said: "We welcome Glasgow's re-affirmation to the Fast-Track Cities commitments to end its HIV epidemic by 2030. We also commend the first Fast-Track City in Scotland for prioritizing getting to zero HIV-related stigma and discrimination, which are barriers to accessing and utilizing HIV services but also deny people living with and affected by HIV their right to dignity, health, and well-being."