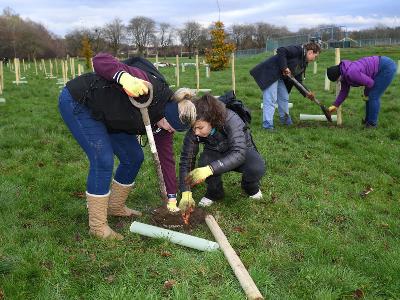 Almost 150 parks, open spaces and other public places in Glasgow have been identified as potential locations to extend the city's tree population.

Just over 16% of Glasgow's 17,730 hectares is covered by an estimated 2 million trees with plans in place to expand the city's tree canopy cover by at least 1% in time for 2030. The Glasgow Tree Plan, which has been approved by the council's City Administration Committee, could see tree planting on a further 189.4 hectares of land trees over the next seven years, potentially introducing over hundreds of thousands of new trees to the city.

With 58,000 new trees already planted in the city over the past three years, further planting will enhance work to sequester carbon emissions as part of the city's effort to tackle the climate emergency.

Councillor Millar said: "Since Glasgow declared a climate emergency in 2019 we have stepped up our efforts to extend the city's tree population with tens of thousands of trees being planted across the city. Our tree plan has identified a significant number of new options for planting, whether that's a pocket forest, adopting a large, under-used open space or contributing to the overarching Clyde Climate Forest.

"But we are also very keen to plant on verges and in streets where additional trees become a much-appreciated feature of the public realm. There can be technical challenges with planting street trees but adding to the canopy cover on our streets acts as a shield from the sun and helps to minimise the risk of flooding.

"We are looking at all the available options for funding for tree planting, including from charities, the private sector and individual donations. There are many groups and organisations interested in tree planting in Glasgow and we want to create the greenest city possible in the years ahead."

Glasgow is also one of eight local authorities involved in the Clyde Climate Forest initiative that intends to see 18 million trees planted across the Glasgow City Region by 2030. In Glasgow Bridgeton, Dalmarnock, Govan, Levern and District and Possilpark have all been identified as neighbourhoods suitable for inclusion in the initiative.

The wider plan for Glasgow includes planting in Linn Park and Cathkin Braes in the south, Tollcross Park in the east and Garscadden Burn Park in the west, but planting will ultimately encompass all parts of the city.  The vast majority of trees planted will be native species with non-native species also incorporated in places to support pollinators and enhance the visual aspect of open spaces.

Suggestions from the public on potential planting locations will also be welcomed with communities and other stakeholders soon able to log their ideas on a forthcoming page on the council website. Some places can be unsuitable for growing due to utility infrastructure.

More details can be found in the report approved by the City Administration Committee on December 1, 2022