Elizabeth Cross presented to brother of soldier killed in Cyprus 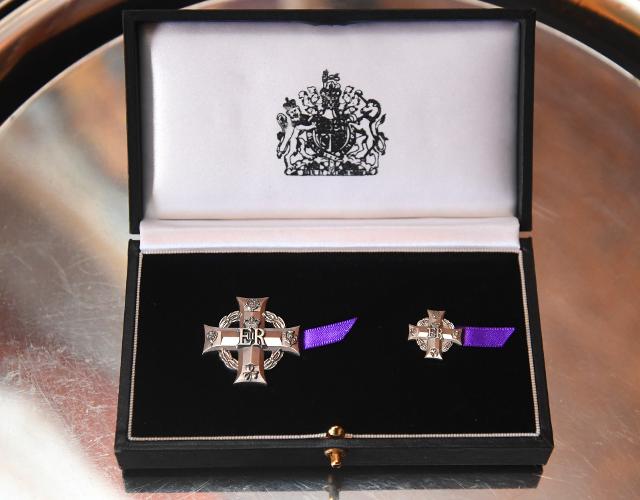 The brother of a Glaswegian soldier killed in Cyprus was presented with the Elizabeth Cross by the Lord Provost, in her role as Lord Lieutenant, at a ceremony at the City Chambers today, Thursday 23 November.

Francis 'Frank' Gahagan, who accepted the honour in recognition of his sacrifice, was only five years old when his big brother, Sapper George Gahagan, was tragically killed by accidental fire in Cyprus.

George was just 21 years old and had served less than a year in the army.

Frank (66) said: "It's very emotional. This means everything to me. It's such a pity my mum couldn't be here. George was a longed-for, and much cherished, child. His death devastated my mum. She never really recovered. My dad was shattered.

"We didn't talk about him much. My memory is sketchy. He must have been home on leave because I remember him standing in the living room looking out the window."

George, was born in Partick on the 25th April 1935, the eldest of proud parents, Isabella and George's, 9 children.

He grew up in Bardowie Street and attended St Peter's School, where his friends called him JoJo. At the age of 15 he began an apprenticeship as a pipefitter at local firm Lowes Engineering and was engaged to be married.

Called up for National Service on 21st June 1956 at the age of 21, George joined the Royal Engineers and, following training, was posted to Cyprus as part of the Middle East Land Forces.

While on the island he learned to drive and was assigned to 37 Field Engineer Regiment.

On 14th February 1957, Spr George Gahagan was tragically killed as a result of accidental gunshot wounds. He had served only 239 days in the army.

He is buried at Wayne's Keep the British Military Cemetery in Cyprus which Frank has visited.

The Lord Provost Eva Bolander said: "It's important that families receive recognition of their loved- one's service. Conflict visits great costs on everyone who loses a member of their family. It's my honour and pleasure to be able to present the Elizabeth Cross. I know it's a source of great pride and comfort to those left behind."