CAPTION:-  Naloxone use has increased in the city as the number of fatal and non-fatal overdoses has risen. The drug may help revive people experiencing an overdose. 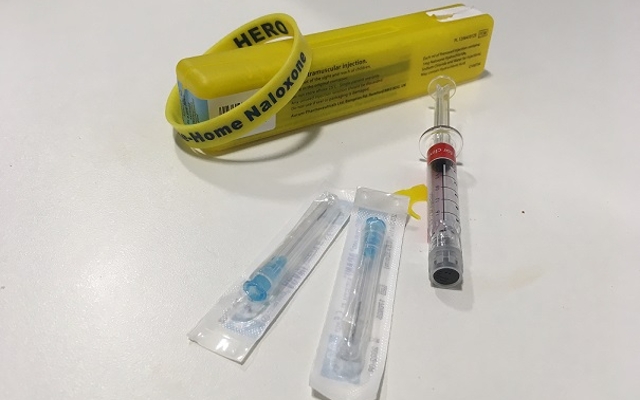 Staff trained in the use of Naloxone, a drug which can revive people experiencing potentially fatal overdoses, sprang into action to avert disaster.

The number of Naloxone interventions in four months, at the Winter Night Shelter alone, demonstrates the high prevalence of drug addiction among Glasgow's homeless community.

Naloxone is used across homelessness services in the city, as Glasgow, like the rest of Scotland, is battling a drug deaths crisis. Fatal and non-fatal overdoses are on the increase.

In 2018, Scotland suffered a record number of drugs deaths. Tragically, 1187 people died across the country and 280 (24%) of deaths were in Glasgow. A number of the people who died were being helped by the city's homeless services, as well as our addiction services. We are currently working on a comprehensive drugs deaths action plan to implement a range of action to respond to this crisis.

Sadly, last year, 45 people recorded as homeless in Glasgow died. Forty-three of the people who died (95%) were in temporary accommodation at the time of their deaths. Drug and alcohol addiction along with mental health problems are prevalent among the city's most vulnerable homeless people. They threaten their long term health and ultimately, their lives.

Susanne Millar, Interim Chief Officer of Glasgow's Health & Social Care Partnership said: "Sadly, of the 45 people who died, the majority of those deaths were related to complex health issues often associated with previous or current addiction issues, including mental health, with a smaller number recorded as drugs deaths.

"Many of our service users who died had previous or existing addiction issues, some also with significant mental health needs. It is the complexity of those needs which contributed to their deaths, rather than issues relating to their housing status.

"The number of lives potentially saved at the Winter Night Shelter demonstrates the scale of the problem. Unfortunately, this heart-breaking reality is replicated in our other homelessness services too. It is emotionally difficult for staff and trained volunteers at the Night Shelter who work closely with service users and whom I'd personally like to thank for their dedication and professionalism in these difficult circumstances."

At the last official count, there were 29 people sleeping rough in the city. The Winter Night Shelter, run by Glasgow City Mission, can accommodated up to 40 people and in winter 2018, although more people used it, it was never full and multi-agency work at the shelter saw the vast majority of guests offered alternative accommodation quickly.

Homeless people with complex needs are being helped by Glasgow's Housing First initiative which provides mainstream secure tenancies for people. Reintegrating into a community can prove difficult for people who have lived in hostels or slept rough.

As well as offering people their own homes, Housing First also provides intensive wraparound support to help them maintain their tenancies. This can include help liaising with utility companies, buying basic furniture, ensuring they are in receipt of all the benefits they are entitled to, encouraging them to attend medical appointments and learn new skills to boost their self-confidence and future employability.

Since Glasgow's Housing First programme began in September 2018, 70 people have moved into new homes and 91% of those tenancies have been sustained. This includes people who were previously accommodated in outdated and unfit hostel accommodation which has been closed.

The Housing First programme operates in addition to existing homelessness services for people who do not have such issues.

In 2018/19, Glasgow received 9,688 approaches for Housing Options advice, with 59% (5,679) progressing to a homeless application. This is 16% of Scotland's total homelessness applications.

The 4009 cases which did not progress to homelessness applications, were not roofless and were seeking information and advice regarding their housing status.

We know that where we have a duty to provide permanent accommodation for people who are homeless, this does not happen quickly enough, and many people spend too long in temporary accommodation. We are working with partners and with the Scottish Housing Regulator to speed up our processes and reduce the length of time people spend in homeless accommodation.

Our Rapid Rehousing Transition Plan (RRTP) will transform the service over the next five years, including the reduction of time spent in temporary accommodation and speeding up access to permanent solutions, including for those with complex needs through Housing First, moving away from outdated hostel accommodation and reducing the use of B&B accommodation.

This works includes an investment in statutory and third sector resources to support implementation of the RRTP.

Critical to the success of all of this work is the need for us to continue to work closely in partnership with the city's 68 Social Registered Landlords, Third Sector partners and people with lived (personal) experience of addiction and homelessness to address the challenges faced in a city with well documented deprivation issues.

CAPTION:-  Naloxone use has increased in the city as the number of fatal and non-fatal overdoses has risen. The drug may help revive people experiencing an overdose.