Pupils from Aultmore Park Primary School headed out to Blairtummock Park today to mark the recent completion of the £7.4 million Greater Easterhouse Green Infrastructure Project which has created new greenspaces and enhanced those existing, by introducing surface water management features that will reduce the risks and impacts of flooding for the local area, and also downstream through the east end of Glasgow, whilst creating drainage capacity for housing led regeneration.

The project has created new and improved open space through an integrated green and blue network across Cranhill, Ruchazie and Blairtummock. Practical completion of works (construction) are complete with additional landscaping to take place in the Spring.

The pupils were particularly keen to see one of the recently installed footbridges that spans the new open section of the Whamflet Burn, following on from their previous site visit where they helped contractor R J McLeod choose the colour of the new footbridges within the much improved local park. 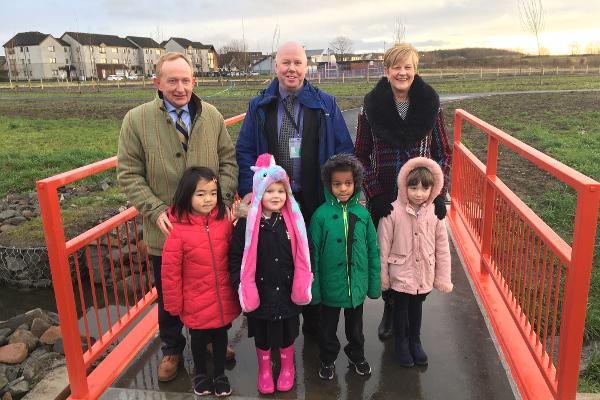 Glasgow City Region City Deal (funded by both the UK and Scottish Governments) provided funding for the project through the Metropolitan Glasgow Strategic Drainage Partnership (MGSDP) - with Scottish Natural Heritage providing Green Infrastructure funding from the European Regional Development Fund. The project also benefitted from contributions from the Vacant & Derelict Land Fund and the Heritage Lottery Fund via the Seven Lochs Partnership.

Works delivered on site to the design developed by Sweco, have seen the area's natural resources advanced to encourage increased use of local parks and other high-quality green and water spaces (including links to the Seven Lochs Wetland Park) - alongside interventions to tackle flooding which can result from heavy rainfall.   By implementing improved drainage measures, the potential for future residential and commercial developments has now been unlocked and local wildlife protected, including the creation of connected habitat networks for the area's grassland water voles.

Through MGSDP City Deal investment of circa £45m, Glasgow is proactively working in partnership with key stakeholders such as Scottish Natural Heritage to deliver a programme of schemes to 'Sustainably Drain Glasgow', targeting areas across the city where rainfall adversely impacts communities.

Cllr Kenny McLean, City Convener for Neighbourhoods, Housing and Public Realm said; "I'm delighted to see completion of the Greater Easterhouse Green Infrastructure Project that, through partnership working will deliver a wealth of social, economic and environmental benefits to the local community in the east of the city.  Not only has the project increased the attractiveness of the area by developing its natural resources, it's also reduced the risk of flooding which will encourage future development, allowing more homes to be built, and bring more visitors to the area."

Dr Mike Cantlay OBE, Chair of Scottish Natural Heritage said; "We are delighted to celebrate the completion of the Greater Easterhouse project and to see local communities and school children already benefitting from the dramatic greenspace changes. The scale of this project was ambitious, with a total area equivalent to more than thirty Hampden Parks transformed from vacant and derelict land into attractive urban parks and green corridors. Its completion has taken us a step closer to creating a nature-rich future for everyone in Scotland by improving biodiversity, creating better habitat for wildlife, helping to mitigate climate change and reduce flood risk and connecting more people with nature, with all of the many mental and physical health benefits that brings."

Cabinet Secretary for Infrastructure, Michael Matheson said: "The partnership working demonstrated within this project and all through the Glasgow City Region Deal is very encouraging to see. We want the deal to deliver inclusive economic growth for communities within Glasgow and its wider city region. By collaborating with key stakeholders and utilising other funding sources, regional partners can extract the most value from the Scottish Government's £500m investment in the deal."

Cllr Maureen Burke, Chair of Seven Lochs Partnership said; "The Greater Easterhouse GI project is a great example of organisations working together to deliver benefits for people and nature. We now have two new, high quality green routes that connect surrounding communities to the Seven Lochs Wetland Park as well as new habitat for Glasgow's unique grassland water voles. It also offered a great opportunity for the Seven Lochs Partnership to work with local people to celebrate their local heritage by designing way markers for the Water Vole and Provan Hall trails".