Glasgow City Council today (16 January) approved the award of a contract to BAM Nuttall Ltd to deliver a new pedestrian and cyclist bridge over the M8 connecting Sighthill and Glasgow city centre. 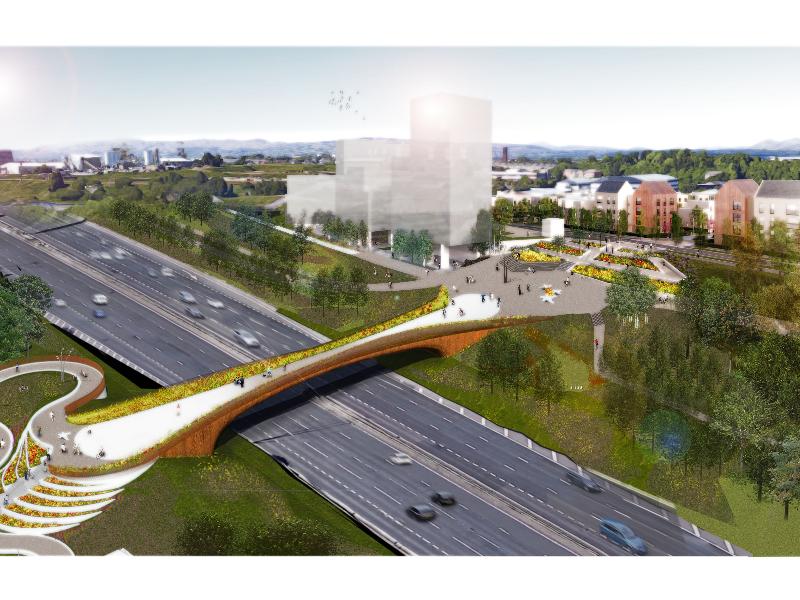 The contract - worth £18.468million - is funded through the Glasgow City Region Deal, which sees the Scottish and UK Governments each providing £500million for infrastructure projects in the Glasgow city region.

The new bridge will connect Sighthill and communities in North Glasgow to the city centre, with Sighthill a walk of 15 minutes or less from George Square. Given that there will be almost 1000 new homes in Sighthill once the regeneration is complete, it is important - for reasons such as active travel and simple access to the city centre - that such a connection is developed.

This new bridge - a 'street in the sky' - will replace the current one with a structure that is far more attractive and fit for purpose, with landscaping on both the northern and southern approaches forming new civic spaces that allow free-flowing movement for cyclists and pedestrians with special places to pause and enjoy the environment.

This is a key stage in the £250million Sighthill Transformational Regeneration Area (TRA) - the biggest such scheme in the UK outside of London.

The bridge project will begin in February, with completion expected in late summer 2021. BAM Nuttall Ltd will demolish the existing North Wallace Street Footbridge and an existing high mast light, and then build the new footbridge over the M8 including wing walls and ramps on both approaches; retaining walls on the south approaches; will complete landscaping (with a five-year maintenance programme) and construct two new high mast lights.

The bridge span will be just over 58 metres (191 feet), and its width varies between 20 - 7.5 metres.  It will weigh 2420 tonnes (420 tonnes steel, 2000 tonnes concrete) and its structure is a steel box girder with a reinforced concrete composite desk slab.

The approach taken to its design means that the bridge will need minimal maintenance and will also not require painting therefore minimising disruption to the motorway.  The parapets are designed to emphasise key views across the city skyline yet obscure direct lines of sight to the motorway below. The paved bridge deck is an hour-glass form that varies in width from 20 metres at the widest to 7.5 metres at its narrowest.

Final funding of this contract will be considered for approval at the Glasgow City Region Cabinet.

Councillor Susan Aitken, Leader of Glasgow City Council and Chair of the Glasgow City Region City Deal Cabinet, said: "This new bridge will transform and encourage connectivity to and from Sighthill and will very much be a symbol of the emerging regeneration and revitalisation of the North of Glasgow.  Communities like Sighthill are so close to the centre of Glasgow but have for far too long felt remote from it, physically, socially and economically.  The new bridge will connected a vibrant new community to the benefits of its wonderful location and to the wider city."

Michael Matheson, Scottish Government Infrastructure Secretary, said: "I welcome this new bridge, which will provide quick, easy and environmentally-friendly access to the city centre for the people of Sighthill and the surrounding area.

"Including our additional investment, the Scottish Government has now committed to more than £1.8 billion in City Region and Growth deals, helping to bring improvements like this to communities right across the length and breadth of Scotland."

Scottish Secretary Alister Jack said: "It's great to see another milestone being hit at the hugely important and ambitious regeneration of Sighthill.  The Glasgow City Region Deal is essential to ensuring the future prosperity of residents and local businesses.  The UK Government is investing more than £1.4 billion in City Region and Growth Deals across Scotland.  This programme is creating thousands of jobs and opportunities and we will continue to work with the Scottish Government to make sure these reach every part of Scotland."

Once the (50 hectares plus) Sighthill TRA is complete, an enhanced neighbourhood - immediately beside the city centre, just 15 minutes' walk from George Square - will have been created for existing members of the local community and for new residents choosing to move to Sighthill, with almost 1000 new homes of various tenures.

Some of the other features of the regenerated Sighthill will include the recently-opened community campus school, and a new road bridge over the Glasgow-Edinburgh railway line improving the connections between Sighthill and neighbouring communities.  The parkland and the greenspace of the area are being significantly improved, and a new public square, new shops and businesses will come to Sighthill.  Sighthill will be reconnected to the Forth and Clyde canal at the Pinkston basin, with a fantastic canal terrace transforming the area.  Land remediation - now complete - has made the delivery of these new features possible.