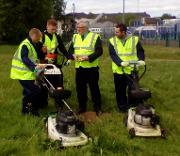 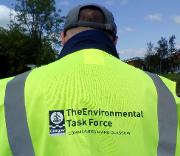 Rapid response teams are to be deployed across Glasgow as part of a newly launched Task Force designed to tackle environmental problems in the city like dumping rubbish, dog fouling and dropping litter.

Led by Glasgow City Council, the Environmental Task Force (ETF) will revolutionise the way the city is maintained, with the public able to make its voice heard via Facebook and Twitter. This real time information from the public will be gathered at a state-of-the-art command centre in Bridgeton, with the 30 rapid response teams then dispatched to tackle the issues as quickly as possible.

Leader of Glasgow City Council and Chair of the ETF, Councillor Frank McAveety, said: "The Environmental Task Force is a service fit for delivery in the digital age. We want genuine engagement with the people of Glasgow to work with them to build a better city.

"Through Twitter and Facebook the public can directly communicate with us and identify what needs to be done across Glasgow.

"I am determined to make this work. The Environmental Task Force will deliver - the people of Glasgow deserve that."

The ETF's main aim is to tackle environmental issues including fly tipping, littering and dog fouling. An emphasis will also be placed on improving neighbourhoods throughout the city through environmental enhancement.

The ETF model sees the city's 21 wards grouped into four Task Force Cycles. An ETF team will arrive in a ward each week and work on that area before starting the whole process again in a new ward the following week.

And as part of the programme, a major recruitment drive will take place which will see unemployed people of all ages from across the city trained up as ETF officers.

Frank McAveety added: "This huge commitment is a collaborative approach which sees the city's biggest assets working together in a bid to deliver better services for the people of Glasgow. The Task Force will not replace the Cleansing Department, which empties 23 million bins a year. Instead, it is a strategic add-on that will make a real difference.

"Thanks to our partnership approach, ETF officers will be able to respond quicker than ever before and will also take a more proactive approach to dealing with environmental problems across the city."

An inclusive campaign, the ETF wants to encourage the people of Glasgow to get engaged and become part of the ETF action plan.

The new social media channels are in addition to the council's existing MyGlasgow app.