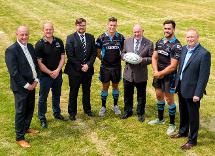 Scotstoun Stadium is set for a major upgrade after Glasgow City Council approved plans that will see £750,000 invested on a new all-weather synthetic playing surface and significant improvements to the existing athletics facilities.

The investment will ensure that the stadium retains its position as a centre of excellence for rugby and athletics while continuing to meet the needs of the wider sporting community. As well as a new synthetic playing surface, the investment also paves the way for improved athletics and rugby training facilities, a new event standard throws area and improvements to the outdoor running track.

The existing grass infield at Scotstoun Stadium has been badly affected during recent winters with heavy rainfall rendering it unplayable for long periods. During the 2015/16 rugby season Glasgow Warriors were unable to play three matches at Scotstoun and a fourth game was postponed, while there was limited use by Victoria Park City of Glasgow (VPCOG) Athletics Club due to the weather.

The artificial pitch, which will meet World Rugby guidelines, will significantly reduce the risk of Glasgow Warriors fixtures being postponed. It will also increase the use of the infield for athletics during club sessions. Improvements to the adjacent training pitch will also provide an International Association of Athletics Federations (IAAF) compliant throws area for training and events.

As part of the planned investment the existing 400m outdoor running track will be improved along with drainage works to the training pitch. The improvements will benefit Victoria Park City of Glasgow Athletics Club and increase the current window for athletics events (April to September as opposed to June to August).

While predominantly for use by the athletics and rugby communities a programme for wider community use is being developed. 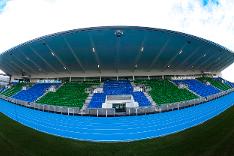 Depute Leader of Glasgow City Council and Chair of Glasgow Life, Councillor Archie Graham OBE, said: "This is great news, not just for Glasgow Warriors and Victoria Park City of Glasgow, but also for the local clubs and schools who use Scotstoun Stadium - securing a lasting legacy for future generations.

"Our investment will deliver significant improvements that meet the very highest standards set by both World Rugby and the IAAF, ensuring that the venue retains its position as a centre of sporting excellence in the west of Scotland. We are now looking forward to work starting in the coming weeks."

Glasgow Warriors Managing Director, Nathan Bombrys, said: "A lot of work has gone on behind the scenes over the last few months, culminating in today's announcement and this is fantastic news for everyone who uses the stadium. From next season we'll have an excellent surface all year round, to play the exciting brand of rugby we enjoy. It will also provide us with exciting opportunities, which will help us grow the club and the game in the west of Scotland.

"We have visited a number of clubs who have similar surfaces, which they either play or train on and we believe an artificial surface is the best solution for Scotstoun Stadium. We'd like to thank Scottish Rugby, Glasgow City Council and sportscotland for funding this project."

Stewart Harris, Chief Executive, sportscotland said: "We are delighted that by working collaboratively with our partners in Glasgow City Council, Scottish Rugby and scottishathletics, together with Glasgow Warriors, a sustainable solution has been found which will benefit rugby, athletics and the local community.

"The creation of a dedicated throws area for athletics as well as the pitch being upgraded, means that the pitch will be able to accommodate more community use than at present. The facilities at Scotstoun are already of an exceptionally high standard, and these improvements will ensure that the training and competition needs of athletics and rugby will be better met for many years to come."

Secretary of Victoria Park City of Glasgow Athletics Club, Gordon Innes, said: "It will be a better training facility, with greater access to the infield and an improved throws area. The extended summer access will see a return of National Championships and League meetings which will be welcomed by the wider athletic community. We're very grateful for the support received from Glasgow City Council, sportscotland, scottishathletics and Glasgow Warriors."

Interim Chief Executive of scottishathletics, Mark Munro, said: "We welcome these recommendations from Glasgow City Council and the partnership approach to Scotstoun, following many discussions.

"It will be pleasing to see investment in the facility which will improve the athletics provision in terms of the new throws area and an improved track surface. And we're delighted to note the commitment to use for clubs, coaches and athletes as well as an opportunity during a certain period to stage events."

Scotstoun Stadium was officially reopened by Her Royal Highness Princess Anne in January 2010 following an £18million redevelopment, which delivered a state-of-the-art multi-sports facility for the people of Glasgow and west central Scotland. It was funded by Glasgow City Council and sportscotland.