Glasgow City Council is to work with the third party owners of quay walls on the Clyde close to the city centre to help unlock the full potential of the waterfront and continue the river's regeneration by upgrading and repairing these key parts of the city's infrastructure where necessary. 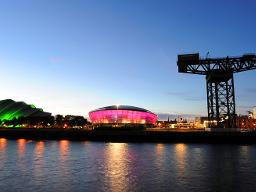 The funding for these projects will come from the Glasgow City Region City Deal as part of its £115million Clyde Waterfront and West End Innovation Quarter project, with approximately £50million allocated for quay wall works. Much of the ownership of quay walls in this area lies outwith the council. It is anticipated that around £15-20million will be available to third-party owners for their quay wall projects.

In June 2018, the council invited expressions of interest from third party owners and after consideration of eight bids through criteria including deliverability and alignment with City Deal objectives, three projects that were judged to be most likely to bring significant economic benefit were selected. These projects were:

SEC Limited - upgrading quay walls on the north-bank of the Clyde adjacent to the Scottish Events Campus (SEC). These walls are assessed as in poor structural condition and do not provide adequate flood defence with the western section of the site within the 1:200 year flood- risk area. City Deal funded quay wall works represent an opportunity to address flood risk and to provide a positive place context for delivery of the proposed campus expansion which will generate significant additional economic output. Any subsequent redevelopment of the SEC West site would further uplift the economic contribution to the City Region, providing additional floorspace and employment.

Drum Property Group - redevelopment of the area around the Canting Basin. The basin has lain vacant for over 30 years. A planning application has been submitted and is currently under consideration. Quay walls at the site are in poor condition and do not provide adequate flood defence. Pedestrian and cycle access along the river edge is not currently possible at this location due to the condition of the site. Density of the development has been reduced due to the need to design around previously unidentified active tie rods which support the quay wall. As a consequence a 30m standoff from the Canting Basin is required meaning that the scope of the public realm works has increased significantly. A contribution from City Deal funding of £350,000 is sought towards total Phase 1 project costs of £20.5m, to deliver high specification public realm works and establish pedestrian and cycle access along the river edge to the south of the Canting Basin.

Drum Property Group / Spiers Gumley - Tradeston/Windmillcroft Quay. In 2017, Drum Property Group secured Planning Permission in Principle for the Buchanan Wharf mixed-use development which will deliver more than one million square feet of new commercial floorspace at Tradeston representing an investment in excess of £1billion. Development of this site will make a significant contribution to the economic growth of the city region. This is supported by the recent announcement by Barclays to relocate and expand operations on the site. This decision will result in the site accommodating over 5,000 employees with approximately half of the jobs new to the city.

Windmillcroft Quay is located immediately to the west of the Buchanan Wharf site. The quay wall at this location has collapsed meaning that there is no pedestrian or cycle access along a 300m stretch of the river edge between Tradeston and Springfield Quay. The condition of the quay wall at this location has been noted as a factor that may deter future developer interest at Buchanan Wharf. Spiers Gumley, who act on behalf of the 278 common owners at Windmillcroft Quay, has submitted an application for City Deal funding.

Councillor Susan Aitken, Chair of the Glasgow City Region City Deal Cabinet and City Convener for Inclusive Economic Growth, said: "Today's decision marks another step on the way towards the regeneration of the Clyde. Work on upgrading and repairing some of the quay walls on the Clyde is an essential part of taking the regeneration of the waterfront to another level. By working with third-party owners, we can use City Deal funding to unlock the potential of a number of sites on the banks of the river that will make a significant impact on Glasgow's social and economic life."